My Cleaning Products recommended to rust contractors and victims its non-toxic rust remover called Rusterizer. The company asserted that it could cut rust removal cost by 50% and encouraged everyone to prove it with its now available complimentary samples. 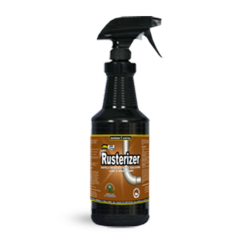 many rust contractors personally related that they were able to save $1,000s in labor cost, thanks to it [Rusterizer].

Rust removal requires hard work. However, My Cleaning Products said that the right rust remover would make it much easier to complete. And so, to all rust victims and contractors, the company recommended the use of the non-toxic rust remover called Rusterizer. It announced that complimentary samples of it are now available and that, as proven by many, it could cut the rust treatment's labor cost by half.

If rust isn't prevented, it could badly damage metal and even non-metal items. It could even cause financial troubles, My Cleaning Products said.

But corrosion is very hard to prevent given that moisture – the thing that triggers its formation – is present almost everywhere. Because of that, the company said that one must learn how to detect and treat it promptly. So to help, it included on its published guide the steps on how to avoid rust. On it, MCP also determined the best rust treatment method to implement.

In case rust gets past the preventive measures, My Cleaning Products stated that the use of a rust remover is the best way to clear it. It pointed out that with it, anyone could deliver a prompt rust removal process. All there is to do is to find the rust or its stain and apply the solution spot on.

However, of the many rust removers, the site said that Rusterizer is the right one to use. It explained that it could make the rust removal process effective without requiring the user to do hard-scrubbing for hours. Given that it is non-toxic, it added that the use of it is also not a health risk.

But that's not all. According to MCP, because Rusterizer makes the process effective and safe without too much work, it could cut any rust removal spending by 50%. It related that many rust contractors personally related that they were able to save $1,000s in labor cost, thanks to it. Particularly, that's because the product replaced many of their employees, it explained.

So rust contractors and other rust victims could prove it themselves that the said solution is indeed the right rust remover, My Cleaning Products also encouraged them to try the Rusterizer complimentary sample. It detailed that they could get it from its official website, MyCleaningProducts.com