Non-Toxic Rust Remover's Complimentary Samples Now Available, My Cleaning Products Shares Where to Get One

My Cleaning Products announced it would be giving out samples of its non-toxic rust remover called Rusterizer. It shared where rust victims and rust contractors could get the said samples. 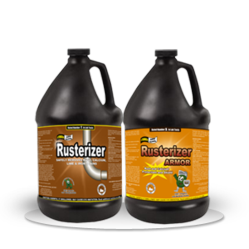 But understanding that being vouched by many is not enough proof for others that Rusterizer is truly effective and safe, My Cleaning Products decided to give out samples of it.

Rust removal is quite hard to effectively complete. But Rusterizer could cut down the time, money and work needed to finish it, My Cleaning Products said. To affirm that's true, it decided to give out complimentary samples of the said rust remover. And as it shared, those samples are now available for any rust victim or contractor.

Metal items and structures are the most-vulnerable to rust damages. My Cleaning Products pointed out that corrosion could leave them weak and could render them completely useless. Particularly, it could freeze screws and scissors, make knives and garden tools dull and kitchen wares and furniture unsightly and unsafe. Moreover, it said that it could separate the parts of a metal structure and possibly cause accidents.

However, in a post, the company stated that rust damages are not exclusive to anything made of metal. It said that rust stains could also cause casualties to other materials. Among those materials, it specified are wood, plastic, concrete and fabric.

Because of the possible accidents it could cause and the decrease in value it could bring to metal or non-metal items, rust must be cleared, MCP said. But rust removal is not at all easy. It cleared that a help, in the form of a rust remover, is needed.

Of the many rust sprays though, My Cleaning Products only recommended Rusterizer. It detailed that it is a non-toxic rust remover. And so, evacuation is not needed when it's used given that it releases no harmful chemicals that could risk anyone's health.

Moreover, the company related that rust contractors have already been using the product for years. Many of them, it said, even testified that they saved $1, 000's from their labor cost because of its effectiveness.

But understanding that being vouched by many is not enough proof for others that Rusterizer is truly effective and safe, My Cleaning Products decided to give out samples of it. That's so the public could see for themselves how the said non-toxic rust remover truly works. And as it added, any rust victim or rust contractor could request for the said samples.