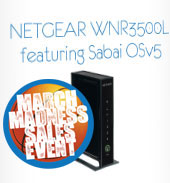 Expats formerly relegated to watching the same DVDs over and over again can now tap into the vast online libraries of the major American streaming services.

It’s that time of year again, when American college basketball fans collectively obsess over March Madness and brackets. Sabai Technology, leaders in VPN Routers for the home, is celebrating March Madness with a sale that will have customers seeing nothing but NET …. NETGEAR, that is.

For a limited time, Sabai is offering $40 off of their modified NETGEAR WNR3500L WiFi VPN Router model. This VPN Router, which comes with Sabai OSv5 pre-installed and ready to connect, will be available at a record-low price. The NETGEAR is a great mid-range router, perfect for medium sized home networks. VPN consumers who have been looking to score a great deal on a quality home VPN Router should look no further than the NETGEAR from Sabai Technology.

Sabai OSv5 is the newest game changing operating system from Sabai Technology. Promoting Technology for the People, Sabai is all about ease of use and a great customer experience. For anyone living outside of their home country and missing the comforts of their “local” internet experience, this setup is the dream team.

Expats formerly relegated to watching the same DVDs over and over again can now tap into the vast online libraries of the major American streaming services. No matter which continent an expat now calls home, they can connect to American internet on any device on their home network. A subscription to a VPN provider and a VPN Router by Sabai Technology allows expats to connect their foreign home network to an American city. With just a few clicks, an American expat in Europe can “virtually” relocate to New York.

The VPN Router by Sabai Technology allows devices previously unavailable to VPN to be a part of that network. Smart TVs, Blu-Ray players, and smart streaming devices can all be virtually relocated with this device. With so many entertainment options streaming these days, this slice of American life can be a huge relief to culturally overwhelmed expats as they live abroad.

Sporting events have been slower to online streaming availability than other forms of entertainment, like movies, television and music. Slowly, and with some restrictions, this is beginning to change. And while international fans intent on watching their favorite games online may have to jump through a few hoops, companies like Sabai Technology are making those hoops easier to navigate.

Sabai Technology is a VPN networking solution for the every-man, offering easy to use VPN Routers that work with some of the largest VPN service providers in the world. Customers use Sabai's products to extend their PPTP or OpenVPN account to multiple devices and utilize VPN services on products that aren't otherwise accessible. For more information, visit http://sabaitechnology.com.