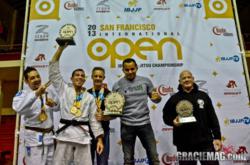 You don't have to be a fighter to train with our champions.

Local Brazilian Jiu-Jitsu powerhouse academy Yemaso BJJ made a visit to the Kezar Pavillion, San Francisco for the IBJJF San Francisco International Open where they brought back 25 medals and earned the 2nd place team title.

Marcos Torregrosa, a three-time Brazilian Jiu-Jitsu world champion, has been on a tear. Before this first tournament of the year, Torregrosa amassed 14 medals at IBJJF tournaments in 2012.

Marcos, with his relentless collecting of titles, is ranked number three in the world among black belts in the masters division. Realizing the number one ranking is one of Marcos' goals for the year. His expression of jiu-jitsu technique and focus was enough to earn him two gold medals in San Francisco to begin the 2013 tournament season.

Yemaso BJJ started the day off taking the adult age group by storm. The group collected 5 medals and started with an early lead in team points. As the tournament unfolded it seemed unlikely the Sacramento BJJ academy would earn a team title with only 19 competitors. But, at the end of the night, with only 3 matches left in the entire tournament purple belt Rich Bothun and instructor Marcos Torregrosa both won open weight division Gold medals giving the academy enough points to earn the 2nd place team title.

The open weight division, often referred to as the, "absolute" division, is a division that participants cannot just sign up to compete in. Rather, the absolute division is a consolidation of all of the medal winners from that belt division. You have to be a champion in order to compete in the open weight division. It is referred as the absolute division because by winning a gold medal in that division you firmly establish that you are the best competitor in that entire belt rank regardless of weight. In the open absolute division you can have a competitor weighing 141 pounds competing against a 270 pound, or more, competitor to establish who truly is the undisputed best competitor at that belt rank.

The 2nd place team title is incredibly significant for obvious reasons. But, in addition, there are two circumstances that make this more special. First, the Sacramento BJJ academy has only been in operation a little over one year. Second, the number of competitors they took to the event pales in comparison to the numbers some of the other teams took. Ralph Gracie Jiu-Jisu the 3rd place team title winner, for example, took an army of 50 martial artists to the tournament.

When asked if he was surprised, Marcos Torregrosa said that he was not at all surprised, "We put in tremendous amount of work; I am surrounded by some of the most dedicated individuals I know. The proof is in the pudding. You don't have to be a fighter to train with our champions."