Systematic Development Group, the developer of the encrypted LOK-IT Secure Flash Drive, announces that it has confirmed LOK-IT compatibility with SAFE devices, Samsung Galaxy SIII and Samsung Galaxy Note II, adding them to the list of compatible Android smartphones and tablets. 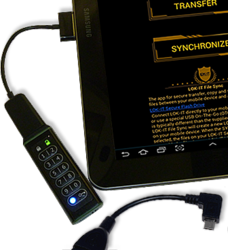 We think there can be an additional Fifth Pillar - this one we call Portable Data Sharing & Transfer – composed of LOK-IT and the LOK-IT File Sync app, which work seamlessly with Samsung SAFE devices.

Samsung SAFE™ devices, which are business-ready and IT compliant mobile devices, can securely transfer portable data onto and off of LOK-IT Secure Flash Drives®, SDG has announced. Utilizing LOK-IT with the USB On-the-Go (OTG) capability of both the Samsung Galaxy SIII and Samsung Galaxy Note II, enterprises are able to provide users with a secure means for storing, transporting and sharing large files for use with company owned smartphones or tablets.

Samsung Mobile commissioned a survey with the independent research firm International Data Group (IDG) to poll 500 IT executives and end users. Although both IT executives and end users agreed that security/MDM/encryption capabilities are the foremost critical factor in determining which mobile devices are suitable for business use (84% and 74% respectively), there was a large disparity on the importance of another factor: large file sharing.

Timothy Wagner, Vice President & General Manager of Enterprise Sales Samsung Mobile, stated, “For 43% of the employees surveyed, the top priority is the ability to share large files compared with just 23% of IT executives.”

“There are many situations where end users do not have access to a high speed connection suitable for the transfer of large files to their smartphone or tablet. In addition, business partners and customers might not be able to access the business’ network,” stated George Wolf, SDG President.

“In order to share large files, often the best way is still with a USB flash drive. Of course, typical flash drives are a huge liability, but the LOK-IT Secure Flash Drive is able to connect with the Samsung SAFE devices and effectively close the gap between end user needs and IT priorities.”

The LOK-IT Secure Flash Drive encrypts all data stored to it with 256-bit AES hardware encryption and can be used with any operating system, including Windows, Mac O/S, Linux, Android and Chrome.

SDG has even taken secure file transfer on Android devices a step further. Last month it announced the launch of the LOK-IT File Sync app, which makes it easy for users to synchronize, transfer and copy files between their Android devices and LOK-IT.

“Best of all, the LOK-IT File Sync app only works with LOK-IT Secure Flash Drives, so IT can feel good about making the sharing of large files easy,” added John Tate, SDG Executive Vice President.

“Samsung has identified Four Pillars of SAFE, which are the components that provide businesses with outstanding security and usability. We think there can be an additional Fifth Pillar - this one we call Portable Data Sharing & Transfer – composed of LOK-IT and the LOK-IT File Sync app, which work seamlessly with Samsung SAFE devices. Together, these 5 Pillars make BYOD policies much less frightening,” Tate explained.

About Systematic Development Group
SDG is the developer, manufacturer and distributor of the LOK-IT Secure Flash Drive®. LOK-IT protects all contents with 256-bit AES hardware encryption and provides the means for authentication via an onboard PIN-pad, utilizing the patents pending DataLock® technology from ClevX, LLC. LOK-IT is completely Operating System independent, working with any O/S including Windows, Mac, Linux, Android, Chrome, Symbian, and even embedded systems found in office equipment and medical devices.

LOK-IT is FIPS 140-2 Level 3 certified and is the preferred choice to secure portable data for large enterprises, healthcare organizations, government agencies and armed forces worldwide. LOK-IT may be purchased online or by contacting them directly at 954.889.3535 or http://www.LOK-IT.net.