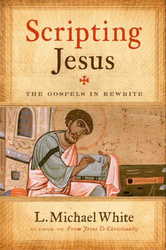 Scripting Jesus: The Gospels in Rewrite by L. Michael White

The gospel stories have shaped the beliefs of almost two-and-a-half billion people.

In Scripting Jesus: The Gospels in Rewrite (HarperOne; May 2010; $28.99; ISBN 9780061228797), famed scholar of early Christianity L. Michael White challenges the idea that the Bible records the inerrant, true-life, historical Jesus. Instead, White demonstrates that each of the four gospel writers had a specific audience in mind and a specific theological agenda to push, and consequently wrote and rewrote their lives of Jesus accordingly—in effect, scripting Jesus to get the desired audience reaction.

The gospel stories have shaped the beliefs of almost two-and-a-half billion people. But the gospel writers were not reporters, but storytellers, and the stories they told publicly about Jesus were edited and reedited for the greatest effect. To understand how these first-century Christians wanted to present Jesus offers us a way to make sense of the sometimes conflicting stories in the gospels.

One gospel’s version of events will be at odds with what the church says or what another gospels indicates. For instance, in Jesus’s birth narrative, there is no mention of a stable in Matthew and Luke, there are no wise men in Luke, and no shepherds in Matthew. In several gospels and Pauline letters, Jesus has brothers (and sometimes sisters), but to preserve the virginity of Mary, the Catholic church insists James was only the “half-brother” of Jesus.

With his usual engaging style, White helps the reader read the gospels, gives us a clearer idea of what the gospels stories meant to people in ancient times, and offers insight for how we can understand Jesus’ story today.

About the Author
L. Michael White is the Ronald Nelson Smith Chair in Classics and Christian Origins and is the director of the Institute for the Study of Antiquity and Christian Origins at the University of Texas at Austin. He was featured in two award-winning PBS Frontline documentaries, “From Jesus to Christ: The First Christians” and “Apocalypse!,” for which he also served as principal historical consultant and co-writer. He also directs ongoing archeological excavations of one of the oldest Greco-Roman synagogues at Ostia, Italy.