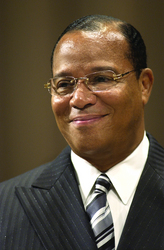 I intend in my Saviours’ Day address to provide Divine warning and guidance from the Honorable Elijah Muhammad to the Black community to the American people and to our brother, President Barack Obama.

With extremely tough economic times, high levels of crime and violence, a confusing new political reality, and the fear of more horrific natural disasters such as the recent earthquake in Haiti, guidance from the Honorable Minister Louis Farrakhan is needed now more than ever.

The Nation of Islam's Annual Saviours' Day Convention will be held February 26 and 27, at the Stephens Convention Center, located at 5555 N. River Road in Rosemont, IL and culminate with a keynote address "The Time and What Must Be Done" by the leader of the Nation of Islam on Feb. 28 at the United Center located at 1901 W. Madison in Chicago.

"I intend in my Saviours' Day address to provide Divine warning and guidance from the Honorable Elijah Muhammad to the Black community to the American people and to our brother, President Barack Obama," said Min. Farrakhan. "It is critical that everyone understand the time in which we live so that we can act in the manner that could save our lives," he continued.

Established in 1930, this year's convention marks the 80th year of the Nation of Islam's service to the oppressed and down trodden in North America. Each year, to also commemorate the birth of Master W. Fard Muhammad--the founder of the Nation of Islam--members, world leaders, celebrities, and supporters from all walks of life make the journey to Chicago to attend the annual assembly. The weekend of events equips attendees with the necessary tools to forge self-improvement, community empowerment and global change.

During the entire weekend, much attention will be placed on the current disaster in Haiti where Min. Farrakhan has already been marshalling aid and assistance efforts from the Black community.

"Haiti needs all the assistance she can get. We in the Nation of Islam are organizing our efforts to provide relief and in the spirit of the Million Man March, The Millions Women's March and the Millions More Movement we encourage everyone to organize their efforts into a National Response to Haiti "If we come together and speak with one voice and use the brightest and best of our minds to organize an effective response to this from the entire Black and Hispanic community of America, what a statement that would make. After we assess what we have done and the success of it, we have a working model for bad days that may soon come upon us," said Min. Farrakhan.

Reserved space for media is limited. Media organizations interested in coverage should respond immediately. To register for media credentials, members of the working press should go to http://www.finalcall.com/press/.

Requests for media credentials should be submitted by 4 p.m. on Friday, February 26, 2010.

There will be a press mult for the electronic press and video and audio will be provided. All radio and TV media will have to take a feed from the mult to get the head-on and program video. Video cameras will be allowed to get cutaway shots. Writers and print reporters will have seats in the arena. Still photographers will be provided with opportunities to get shots of the crowd and the stage.

Members of the media must present current, official media credentials or a Letter of Assignment on official company letterhead and photo ID on the day of the event. By applying for media credentials you are agreeing to abide by the terms and conditions of our Media Credentialing Policy.