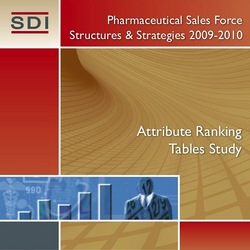 Sales force rankings are calculated by combining a quality and familiarity score. The quality score is the average of physicians’ ratings of their overall impression of a company’s sales force on a 1 to 7 scale, with 7 representing superior performance. The familiarity score is the percentage of respondents who indicate that they are at least somewhat familiar with the company’s sales force.

In addition to overall quality and familiarity, physicians rated sales forces based on five important attributes: product knowledge, sensitivity to time constraints, professional demeanor, provision of sufficient samples, and unbiased product comparisons. Cardiologists’ ranking of Merck improved from 2008 to 2009 in each attribute, with the largest jump, from sixth to second place, in product knowledge.

During the first 11 months of 2009, a Merck sales representative was most likely to discuss Vytorin or Zetia with cardiologists during sales calls. These brands represented just over half of Merck’s product discussions.
The Ranking Tables Study is part of SDI’s Pharmaceutical Sales Force Structures & Strategies service, which also includes company sales force updates, company profiles, and therapeutic class reports.

SDI is a leading healthcare market insight and analytics firm. It provides the industry’s most comprehensive de-identified patient-level data to pharmaceutical, biotech, and medical device companies, enabling them to better understand the healthcare market. SDI also serves the government and the financial services, media, and consumer packaged goods industries. Founded in 1982, SDI counts the world’s top 50 pharmaceutical and biotech firms as its clients.