With hidden object games for social and mobile platforms continuing to be a hot genre for casual players, family-friendly game developer Selectsoft is pleased to announce the launch of Time Chronicles™: The Missing Mona Lisa, a new hidden object time travel adventure for fans of classic HO games. 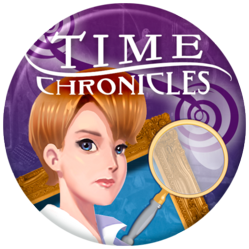 Family-friendly game developer Selectsoft is pleased to announce the launch of Time Chronicles™: The Missing Mona Lisa, a new hidden object adventure currently available from the leading online marketplace for casual games, Big Fish. Selectsoft's most immersive and fully-featured HOG title thus far, Time Chronicles: The Missing Mona Lisa is coming soon for Mac and iPad and features pure hidden object fun with a unique twist—each hidden object scene in the present features a parallel scene to search in the past.

In The Missing Mona Lisa, the famous painting has been stolen and scattered through history by the mysterious “Time Chameleon.” Players search scenes for “time traces” left by the Chameleon, then travel backwards in time to the exact same location in the past. The mystery may take players from Da Vinci’s workshop during the present, to the master’s studio in the Renaissance; from the Tower of London today to the same cell during the Middle Ages; from a treasure room in modern Moscow to the same room during the reign of the last Tsar. Featuring 20 exotic locations around the world and extraordinary eras throughout history, there’s no telling where the chase through time will end.

Time Chronicles: The Missing Mona Lisa is designed for fans of classic HO games, focusing on fast gameplay, rich visuals, fun mini-games and thousands of hidden objects rather than a complicated story. “As a family-friendly game company, it's important to us to create apps for all ages,” says Selectsoft VP Edgar Chen. “Time Chronicles brings back the classic play of true hidden object games that the whole family can enjoy, with a unique time-travel twist.” The Missing Mona Lisa has a fun, accessible adventure storyline, as players assume the role of Chief Investigator of Interpol's Environmental Crimes Unit, assigned to track down the thief and recover the painting.

With the imminent launch of Time Chronicles: The Missing Mona Lisa on Mac and iPad, and planned upcoming releases for iPhone and Android, Selectsoft is reaffirming their commitment to providing family-friendly, pick-up-and-play games for the mobile and desktop markets. “I believe there’s an emerging trend of players that just want to have fun and relax with a classic casual HOG,” reflects Chen. “These are players who want a true HO experience and value a lot of gameplay with seek and find objects. That’s who we want to make games for.” Time Chronicles: The Missing Mona Lisa is available now for PC at http://www.bigfishgames.com and will be coming soon for Mac and iPad on the App Store.

About Selectsoft
Selectsoft is a leading developer of family-friendly games and apps, creating best-selling games for Nintendo DS™ and Wii™, iPhone®, iPad®, Android and PC. They're also one of the largest independent publishers of PC software, featuring licensed content from Broderbund, Disney, The Learning Company and many more. For almost 20 years, Selectsoft has been dedicated to providing affordable, fun entertainment for the whole family. Visit http://www.selectsoft.com to learn more.