New Book Reveals How to Gain Control Over Negative Thoughts

Self-improvement expert and corporate trainer, Dan Low is the author of a new book entitled "Maximize Your Potential with Powerful Tools… and No Stress" about how to gain control over sub-intelligent thoughts referred to as Monkeys. 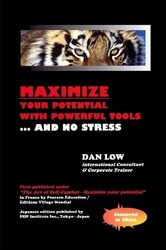 This book is a 'martial' art of a new kind

A new book has been released entitled "Maximize Your Potential with Powerful Tools… and No Stress" by self-improvement expert and corporate trainer, Dan Low.

According to Low, millions fall victim each day to a small, specific group of sub-intelligent thoughts roaming their subconscious. Many psychologists and sociologists believe that these now identified, sub-intelligent thoughts referred to as Monkeys, are responsible for terrorism, crime, violence, addiction, stress, natural disasters - as well as corporate and personal dysfunction.

As a trainer, Low spent years helping others get the Monkeys off their backs. He has conducted more than 150 conferences and 500 interactive sessions in Europe for the public and for private companies. One of his contentions is that unless people regain control over their Monkeys, their intelligence will be no higher than the apes.

"An ape lives in his feelings, is his feeling, and possesses nothing which can detach itself from his feelings - in short, an ape completely identifies himself with his subconscious images. Unfortunately, most men also live in this state," declared Dr. Rolf Alexander, M.D.

The book was first published in France by Pearson Education as "The Art of Self-Combat - Maximize Your Potential" and is backed by 3 years intensive research and more than 25 years observation of the undeclared, self-inflicted psychological war raging in the minds of the everyday man and woman.

The book provides a no-nonsense, step-by-step, easy-to-understand approach to maximizing one's potential through untapped talents. Combining Eastern philosophy and Western psychology with strategic reasoning, it covers topics from how people function to how to attain objectives with no stress.

Written in dialogue form, it takes the reader through virtual training derived from actual interactive sessions conducted with participants from all social, professional and cultural backgrounds coming from Europe, Asia and the United States.

Low admitted he once succumbed to the Monkeys and that these sub-intelligent thoughts used to beat him up daily until he decided to fight back. By observing their attacks on others as well as himself, he was able to identify them, particularly the Gang of Four: You want / You can't / What's going to happen? / You're going to lose - one of the most deadly.

This gang alone is responsible for feelings of greed, restlessness, discontent, fear and frustration. And there are many others lying in wait, says Low, which can trigger hate, violence or vulnerability. The Torture Twins: You shouldn't have / You should have, are known to sadistically rip victims apart with guilt, regret and depression.

Low suggests releasing the Tigers, fact-based decisions arrived at through strategic reasoning - asking who, what, where, when, why and how - to disarm the Monkeys. Backed by a series of original tools to handle time efficiently, motivate, communicate, anticipate, manage change and paradox, and broaden one's vision to diminish the power of the Monkeys and keep them at bay.

"This book is a 'martial' art of a new kind," observes one reader, "to fight mentally against our internal enemies, handle even the most difficult situations, and evolve".

The book has been censored in China. Low believes it is because the concepts are very revealing and empower the individual. Though different, he says the book is in the same vein as "Thick Black Theory" by Li Zhongwu, which was banned in China since its publication in 1911.

"Not everybody is ready to face the mirror," says Low. Like Lao Tze said, "Conquering others requires force. Conquering oneself requires strength." And Low warns, "Though Monkeys have low intelligence, they are a force to reckon with, and you've got to be highly motivated to want to regain control over your life - or you may stay a slave forever."

The 276-page book is available through Amazon and other major online bookstores.

A self-improvement expert and corporate trainer, Dan Low intervened at UNESCO and at ARFEC for senior and top executives, taught techniques of advanced management at the French University Paris Nord, was coordinator of the Management Group in an international networking association of professionals and alumni of major business schools. His seminars were initially attended by CEOs from multinationals before being extended to the general public.