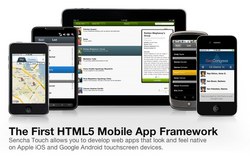 "HTML5 technologies are here, they're being adopted very quickly, and by the end of the year, they'll be running on every mobile device that matters." — Abe Elias, founder and CEO of Sencha.

"HTML5 technologies are here, they're being adopted very quickly, and by the end of the year, they'll be running on every mobile device that matters," said Abe Elias, founder and CEO of Sencha. "As server and client frameworks continue to fragment, the mobile device industry has consolidated on the HTML5-capable Webkit browser as its default platform. We're tremendously excited to be the first to introduce a professional-grade development framework that leverages the incredible work of the Webkit teams."

With the rapid growth of mobile devices — some 200 million smart-phones will ship in 2010 — companies are anxious to create applications tailored for them. But until now, developers have been stumped by the need to learn completely different languages and tool chains to build mobile-targeted user experiences for Android, iPhone, iPad, and other devices. Sencha Touch provides a single framework that runs across every major mobile browser, providing rich, out-of-the-box user interface components that work across platforms.

“Sencha Touch is a big leap forward in mobile app development. We get faster development time, and we can build very rich interfaces that are smooth and natural on multiple devices,” said Craig Walker, CTO of Xero. “Features like drag-n-drop, scroll management, and animations are very polished and fast, and the touch event manager is exceptional.”

“Sencha Touch has a lot of out-of-the-box capabilities that give us native-like app behavior, and we’re very impressed with how easily our apps scale between iPhone and iPad,” said Giles Goodwin, CTO/founder of Widgetbox. “Animations, transition effects, and scrolling are all very smooth. Plus, Sencha Touch themes are flexible enough to build our UI. It’s certainly clear that we’re going to be able to deliver better products to market more quickly.”

More than 50 companies, including iiNView, Symbeont Technologies, and WidgetBox are already developing with Sencha Touch as part of a private beta program to develop mobile computing applications.

· Companies can rapidly meet the expectations of their customers, who increasingly expect high-quality application experiences on their mobile devices

· Developers can rapidly create rich applications for mobile devices, ultimately cutting development time to a fraction of its current load

· Mobile phone users will experience an application that looks and feels like a native application, with no need to download application updates

Sencha Touch can be used to create mobile applications for a wide range of purposes, including office productivity, business reporting, customer relationship management, supply-chain management, and more. Demonstration applications created with Sencha Touch can be seen using supported mobile devices at:
http://www.geocongress.us
http://www.kivamobile.org
http://www.touchsolitaire.mobi
Currently in Beta, the product will be generally available in July. Sencha Touch will be available under both GPLv3 and commercial license options, and licensed per developer seat.