A royal wedding, with all of its pomp and ceremony, was just the shot in the arm the Brits needed following a long and bitter war. Princess Elizabeth and Lieutenant Philip Mountbatten, the Duke of Edinburgh, calendared the date of November 20, 1947 for the royal nuptials - setting the stage for the largest and most memorable public celebration to take place in Great Britain following WWII. 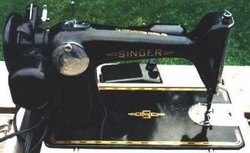 Sixty years later, Queen Elizabeth and Prince Philip will celebrate their diamond wedding anniversary - a release from Buckingham Palace acknowledges that Queen Elizabeth will be the first reigning Sovereign to reach this significant anniversary. To mark the occasion, a special exhibition titled "A Royal Wedding: November 20, 1947," has opened to the public this summer in Buckingham Palace. The exhibit recreates the wedding day with a dazzling array of outfits and uniforms worn by members of the Royal family along with the Norman Hartnell designed wedding dress worn by Princess Elizabeth. Also included are some of the most spectacular items from the Queen's personal jewelry collection (including the diamond bracelet given to Her Majesty by Prince Philip as a wedding gift) as well as several of the 2,500 gifts received from guests and well-wishers around the world.

Included in the display of gifts is a SINGER(R) 201K2 sewing machine presented to the Royal couple by the Provost and Council of Clydebank, Scotland. The beautifully appointed traditional black SINGER machine was manufactured at Singer's Clydebank facility where the 201 model was produced from 1935-1960. The machine is set apart by its stunning gold colored motif appointments on either side of the machine, which made it an icon in the sewing industry. Today, the SINGER name is synonymous with sewing and the distinctive black and gold design is recognized worldwide as a symbol of the SINGER brand.

Mahatma Gandhi, the famous Indian leader, also presented a piece of hand woven material with a personal inscription to the Royal couple. Gandhi had indicated, on another occasion, that "The SINGER sewing machine was one of the few useful things ever invented."

"We are delighted that the SINGER 201 sewing machine was selected for this significant exhibition celebrating Queen Elizabeth and Prince Philip's diamond wedding anniversary," said Don Fletcher, CEO of SVP Worldwide, parent company for Singer. "We extend our warm wishes and congratulations to Her Majesty and Prince Philip."

This event is not the only connection that SINGER has had with the British Royal family. In 1924, King George V presented what has become known as the most magnificent and beautifully appointed dollhouse in history, "The Queen Mary Doll House," to his wife Queen Mary. The dollhouse was the creation of famed architect Sir Edwin Lutyens who designed the house sparing no expense. He created a fully furnished miniature home portraying items found in Windsor Castle. No detail was forgotten, including a miniature SINGER sewing machine in the linen room.

Following the tragic 2004 tsunami in South East Asia, Prince Charles, President of the British Red Cross, visited several sights in northern Sri Lanka devastated by the quake's tidal wave. During his visit he donated SINGER sewing machines to help women in that area resume their livelihoods. The relief effort was enormous following the destruction and loss of human life.

"SINGER is proud to be a part of history with the British Royal family in these many different ways," said Brad Hunsaker, Global Vice President of Sales & Marketing for SVP Worldwide. "SINGER has become the most trusted sewing machine brand in the world and the brand of choice in almost every country."

Founded in 1851, Singer is one of the world's leading sellers of consumer and artisan sewing machines. To date, Singer maintains a strong international presence, with manufacturing facilities in Brazil and China, 10 overseas marketing operations and a network of third-party distributors selling product in more than 190 countries. The company has a long history of innovation in the sewing machine industry, having produced, among other breakthroughs, the world's first portable machine in 1921 and its first computer-controlled machine in 1978.

SVP Worldwide, a global company headquartered in Hamilton, Bermuda and doing business through its affiliated companies in over 190 countries, specializes in the design, manufacture and sale of high quality household sewing machines and related products under the SINGER(R), HUSQVARNA VIKING(R), and PFAFF(R) brand names. For more information about the Company and the company's brands view the following websites: http://www.svpworldwide.com, http://www.singer.com, http://www.pfaff.com, and http://www.husqvarnaviking.com

BWAttachment546711-7.jpgThe SINGER(R) sewing machine is featured in a new Royal Exhibit at Buckingham Palace to celebrate Queen Elizabeth and Prince Philip's Diamond Wedding Anniversary. Included in the display of gifts is a SINGER 201K2 sewing machine presented to the Royal couple by the Provost and Council of Clydebank, Scotland. The machine is set apart by its stunning gold colored motif appointments on either side of the machine, which made it an icon in the sewing industry. Today, the SINGER name is synonymous with sewing and the distinctive black and gold design is recognized worldwide as a symbol of the SINGER brand. (Photo: Business Wire)