Internet-Cottages.com is pleased to announce the addition of this stunning 3-bedroom apartment in Sainte Foy Tarentaise. 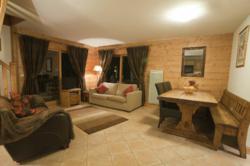 Sainte Foy is one of the truly great ski destinations

Sainte Foy really is one of the hidden gems of the ski world, so Internet-Cottages is delighted to add this beautiful Sainte Foy Apartment to its Ski Accommodation listings.

Situated in the traditional village of Sainte Foy, the apartment is equally well-placed for enjoying the slopes of Sainte Foy ski resort as it is for exploring the nearby big-name resorts of Tignes, Val d'Isere, Les Arcs and La Rosiere. In total, there are over a thousand kilometres of pistes and 450 lifts within a 20 minute drive!

Chalet Petite Foglietta is one of a small number of apartments in the MGM Arpege des Neiges development, located 2 minutes walk from the centre of Sainte Foy village, with its charming restaurants and bars. Furnished and equipped to a high standard, the apartment is on two levels, and comprises open plan kitchen / dining area / lounge, one double bedroom, two twin bedrooms and two bathrooms. A large south facing balcony leads off the living area, with a further private balcony from the Master bedroom.

"We're really pleased to add to our properties in Sainte Foy - it's not somewhere that many people know, but it is one of the truly great ski destinations. The resort of Sainte Foy itself is famous for its quiet slopes and off-piste (and for being where many instructors from Tignes go on their day off!), but if you're based on the village, you've got a massive amount of great skiing within easy reach," says Ian Locke, Director of Internet-Cottages.

Visit the Internet-Cottages website for full details of Chalet Petite Foglietta and other apartments in Sainte Foy.

Internet-Cottages has a wide range of catered and self catering ski accommodation in France from small operators or direct with the owner. For further information on Internet-Cottages or on this PR, please contact: