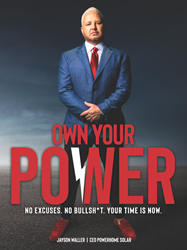 Own Your Power by Jayson Waller

"My goal is to inspire as many people as I can to take control of their lives – that’s how I can give back,” said Jayson Waller, POWERHOME SOLAR CEO and Own Your Power author.

Serial entrepreneur, TV personality and top-performing podcast host Jayson Waller’s new book, “Own Your Power: No Excuses. No Bullsh*t. Your Time Is Now” has reached multiple No. 1 rankings on Amazon’s bestseller lists and also has been named to bestseller lists for the Wall Street Journal and USA Today. It is a culmination of lessons Waller has learned over more than 15 years of entrepreneurship in the home security and solar industries. Waller has become a multimillionaire without a college education or generational wealth, having bootstrapped his way to the top. The hardcover edition releases early 2022.

Waller pivoted to solar in 2014 after seeing another home security entrepreneur make a similar change. Waller’s current company, POWERHOME SOLAR, is one of the nation’s top installers of solar and energy-efficiency products, having been named to the Inc. 5000 list of the fastest-growing private companies four times in the last five years. The company has hired nearly 1,500 people since 2020 and is on track to become a billion-dollar business. His book includes eight chapters, each one ending with a challenge that readers can take in applying Waller’s lessons to their own lives.

“When I was named an EY Entrepreneur of the Year Southeast Award winner in 2019, I was encouraged to start a podcast or write a book because my story was so unique,” Waller said. “It’s impossible for me to choose one thing over the other, and in writing this book, I now can say I’ve done both. My goal is to inspire as many people as I can to take control of their lives – that’s how I can give back.”

Waller’s influence has grown with each touch of media. His podcast, True Underdog, has been ranked as a Top 3 Apple entrepreneurship podcast and has achieved more than 1.5 million downloads since launching early in 2020. He is also a judge on David Meltzer’s pitch show “2 Minute Drill,” airing on Bloomberg TV and Amazon Prime Video, and a guest on Meltzer’s new late-night business talk show “Office Hours,” airing on the same networks.

About Jayson Waller
Jayson Waller, an Ernst & Young Entrepreneur of the Year 2019 Southeast Award winner, is a true champion of industry, having successfully launched and sold two home security companies. His current endeavor, POWERHOME SOLAR, launched in 2014 with just 15 employees, now employs more than 2,200, has expanded to 15 states and is tracking to becoming a billion-dollar business. He’s done all of it without a college degree. In addition to his EY honor, Waller has received numerous other awards, most recently having been named a member of the Detroit 500 list of the most powerful executives in southeast Michigan, and he’s also has been named to the Charlotte Business Journal’s 2020 list of Most Admired CEOs. Under his guidance, POWERHOME SOLAR has been ranked on the Inc. 5000 list of the fastest-growing private companies in America four times in the last five years. Waller is a judge on the Bloomberg TV business pitch show “2 Minute Drill,” and he is also a routine guest on the late-night entrepreneurial talk show “Office Hours” which airs on the same network. His podcast True Underdog has reached acclaim as a Top 3-ranked podcast in Apple’s entrepreneurial category. Learn more about Jayson on his personal website https://jaysonwaller.com or contact him at jwaller@powerhome.com.