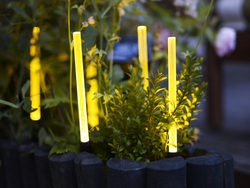 Many have worshipped it. Some even have named Gods after it. Great scientists have studied it for centuries. And mostly everyone lavishes in its light. It's the star that lights our way…and warms our planet all year round. It's the Sun, our natural source of never ending light.

This summer season, IKEA has proclaimed solar powered outdoor lights are 'in' and outdoor electrical lights are 'out'. No more plugs to find outlets for. No wires to trip over. And no hazard of getting light wires wet and causing serious accidents.

The IKEA SOLIG light series is simply powered by the sun. A solar panel in each light captures the sun's rays during the day and lights up at night. Every light in this eight series collection is decorative, sturdy and maintenance-free. No electrical cords to trip over. No outlets to plug in.

SOLIG lights are versatile and easy to use. Just place one, two or more on the ground, on tables, in trees and even on walls. And they are thoroughly tested to withstand moisture and rain.

How do SOLIG lights work?
Each SOLIG light is equipped with a solar cell panel that transfers the incoming solar energy to a rechargeable battery. As long as the battery is charged, the energy saving and long-lasting LED bulb will automatically start to shine as dusk descends.

Some SOLIG outdoor lights have the solar cell panels under a light cap, on the top or are integrated inside the lamp.

Solar powered garden lights provide an efficient, wire free way to decorate and light walkways, gardens, patios and even driveways. The LED bulb and the unique prismatic lens provide a soft, pleasant light for up to 4-6 hours with a one day solar charge. The built in photo sensors cause the lamps to automatically turn off during the day and turn on at night.

About IKEA
IKEA places great value on life at home. A comforting spot where family and friends gather, where children learn and grow. Since its 1943 founding in Sweden, IKEA has offered home furnishings and accessories of good design and functional living solutions at prices so low that the majority of the people can afford them. Currently there are more than 285 IKEA stores in 36 countries, including 47 in North America (11 in Canada; 36 in the US). IKEA has been named to BusinessWeek's List of The Best Global Brands (August 7, 2006) and for four consecutive years, Working Mother magazine's annual list of the "100 Best Companies for Working Mothers." IKEA was listed in March 2007, on Fast Company's Fast 50, for its environmentally responsible products, as well as five consecutive years, Training magazine's annual list of top companies that excel at human capital development. IKEA incorporates environmentally friendly efforts into day-to-day business and continuously supports social initiatives that benefit causes such as children and the environment including UNICEF, Save the Children and American Forests. To visit the IKEA Web site, please go to http://www.IKEA-usa.com.