An emblematic figure on the French music scene, veteran musician Kohndo will release on May 16 his third and most eclectic studio album “Soul Inside,” to the delight of fans around the world. A trailblazer of early French hip hop, Kohndo takes listeners on a more soulful, melodic journey in his latest album featuring excerpts from the work of poet Jacques Prevert along with a distinct world fusion vibe. 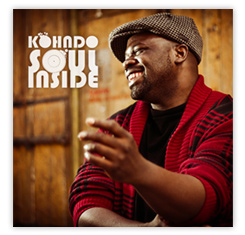 Soul Inside available worldwide May 16

Born from his imagination, Soul Inside reflects Kohndo's roots in soul, jazz and hip hop.

“Soul Inside,” the latest studio album from accomplished hip hop artist Kohndo hits shelves worldwide on May 16. Inspired by personal trials and tribulations, “Soul Inside” is a rhythmic musician's tale, reflective of Kohndo's roots in soul, jazz and hip hop music. “Soul Inside” is available for advanced ordering at Fnac and Amazon.com or digitally on iTunes and VirginMega.fr.

Soon-to-be-released, “Soul Inside” has already forged an eager audience both in Kohndo's native France and various other countries around the world. Tracks in both French and English testify to Kohndo's wide-reaching appeal as an artist while a skillful melange of rock, soul and jazz beats behind hip hop poetry round out the soothing yet singular “Soul Inside.”

About Kohndo
An original member of the legendary French rap group La Cliqua, Kohndo has been a fixture in French music since the early 1990s. Early success took the artist from Paris to New York and back again, allowing Kohndo to collaborate with some of the industry's biggest names.

Since establishing himself as a solo artist, Kohndo has earned praise and worldwide recognition for his unique style, influenced heavily by the soul and jazz masters. Kohndo's second solo album “Stick to the Ground” was mixed partly in Detroit and quickly developed a cross-Atlantic fan base among hip hop enthusiasts in the United States.

Kohndo further evolved his sound with the creation of the Velvet Club, a live band ensemble of masterful musicians. In great demand, the Velvet Club has performed all over France in both intimate concert settings as well as major music festivals, notably “La Rue au Grand Palais”, “Nancy Jazz Pulsation” and “Printemps de Bourges.”

To purchase an advanced copy of “Soul Inside,” visit Fnac or Amazon.com. Digital versions are available May 16 on iTunes and VirginMega.fr.