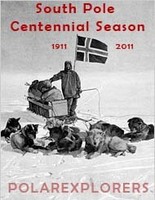 Rick Sweitzer of Polar Explorers always notes January 17th with something of a shudder. It is, after all, the anniversary of Robert Falcon Scott reaching the South Pole, a journey from which he never returned.

"You're always aware of the dates, at least if you find polar history as compelling as I do," he says. "This year it means even more. The 99th Anniversary of Scott reaching the South Pole is the beginning of the South Pole Centennial Year, marking the first century since the conquest of the southern Pole." It was on January 17th, 1912 that Robert Falcon Scott reached the South Pole, believing himself to be the first man to do so. In the heart of the ice, he found a note from Roald Amundsen, informing him that Amundsen's expedition had reached the South Pole a month earlier on December 14th, 1911.

Both men earned a place in history - Amundsen's triumphant, Scott's tragic. The British explorer died on the return journey, writing in his diary: "We took risks, we knew we took them; things have come out against us, and therefore we have no cause for complaint, but bow to the will of Providence, determined still to do our best to the last ... Had we lived, I should have had a tale to tell of the hardihood, endurance, and courage of my companions which would have stirred the heart of every Englishman. These rough notes and our dead bodies must tell the tale..."

THE ENDURING EFFECTS OF POLAR FEVER - TO REACH THE POLE BY ANY MEANS POSSIBLE
Rick Sweitzer has studied Scott and other cases of "polar fever" from more than just books - since 1993 he and his company, Polar Explorers, have led journeys to recreate some of the greatest moments of polar exploration. He's brought many individuals to the North and South Poles over the past seventeen years, on everything from simple flights to the poles to full-on skiing and dogsled expeditions covering hundreds of miles over the ice. The winter of 2011-2012, the anniversary of Amundsen's and Scott's conquests of the South Pole, will be no different. Sweitzer will be on the ice again, leading a few brave companions to follow in the frozen footsteps of both victorious Norwegian explorer Roald Amundsen and doomed British adventurer Robert Falcon Scott.

What draws Sweitzer so deep into the frigid lands? "Some consider the Poles a frozen wasteland. But to me, I think they are some of the prettiest places on earth. The vast expanses open up the mind and challenge the body and spirit in a way that no other place on the planet can do. And I'm honored to share that experience with others who feel the same."

SOUTH POLE CENTENNIAL SEASON WINTER 2011-2012
The South Pole Centennial Season will be commemorated by Sweitzer and Polar Explorers with several different expeditions designed to share this life-enhancing and life-changing journey with adventurers of all skill levels. Flights to the Pole on the anniversary date put the Polar experience within reach of almost anyone. These trips include other activities in Antarctica, such as a visit to a penguin colony, and start at US $40,500. Ski expeditions covering part of the routes taken by the Amundsen and Scott expeditions will allow participants to experience some of the rigors of the polar environment. Expeditions leave from either Punta Arenas, Chile or Cape Town, South Africa; depending on the length of the ski expedition portion of the trip, prices range up to $65,000 U.S. Full itineraries are available at http://polarexplorers.com/expeditions/southpole-centennial.htm.

"It's a once-in-a-century opportunity for a once-in-a-lifetime trip," Sweitzer notes. "There's nowhere else on earth I'd rather be at that moment."