For decades, fans of The Chronicles of Narnia have been drawn into the pages of “The Space Trilogy”—now, E-book readers are invited to experience Lewis’ magical vision of other-worldly creatures and heroic adventures. 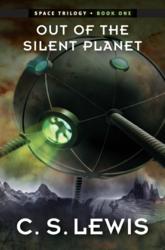 Out of the Silent Planet, Book One of the Space Trilogy by C. S. Lewis.

With enchanting new worlds, an enthralling cast, and an epic battle of good vs. evil, Lewis’ Space Trilogy is available electronically in English for the first time, offering a new way for Sci-Fi and Narnia fans to explore this timeless adventure series.

HarperOne, in collaboration with the estate of C. S. Lewis, announces the first English language E-book release of his three classic “Space Trilogy” titles—Out of the Silent Planet, Perelandra, and That Hideous Strength.

Standing alongside such classics as George Orwell’s 1984 and J. R. R. Tolkien’s The Lord of the Rings, the Space Trilogy follows the brilliant Dr. Elwin Ransom—a character modeled after none other than Tolkien himself—as he wages war against the powers of evil in universes familiar and unknown. Confronted by dark forces who threaten to destroy “The Silent Planet,” Ransom must travel throughout the galaxy in order to save his home, once known simply as “Earth.”

Including enchanting new worlds, an enthralling cast of characters, and an epic battle of good vs. evil, Lewis’ Space Trilogy is available electronically in English for the first time, offering a new venue for Sci-Fi lovers and Narnia fans to explore this timeless adventure series.

“The Space Trilogy books are longtime fan favorites,” says Mark Tauber, SVP and Publisher of HarperOne. “We hope, in bringing these books out electronically, that fans and newcomers alike will be drawn into this remarkable world that only C. S. Lewis could create.”

Out of the Silent Planet (E-Book; April 3; ISBN 9780062197030), the first title in this extraordinary series, introduces readers to Dr. Elwin Ransom, a Cambridge academic abducted and taken by spaceship to the red planet of Malacandra, or Mars. While plotting to evade his captors—who plan to plunder the planet’s treasures and offer Ransom as a sacrifice to the creatures who live there—he discovers he hails from the ‘Silent Planet,’ or Earth, whose tragic story is known throughout the universe.

The second novel, Perelandra (E-Book; April 3; ISBN 9780062196934), describes Dr. Ransom’s voyage to the paradise planet of Perelandra, or Venus, which turns out to be a beautiful Eden-like world. Horrified to find his old enemy there as well, Ransom engages in a desperate struggle to save the innocence of Perelandra.

That Hideous Strength (E-Book; April 3; ISBN 9780062196941) concludes the adventures of Dr. Ransom, who faces an epic battle against dark forces preparing an assault on planet Earth. It is up to Ransom and his friends to squelch this threat by applying age-old wisdom to a new universe dominated by science. The two groups struggle to a climactic resolution that brings the Space Trilogy to a magnificent, crashing close.

About C. S. Lewis
Clive Staples Lewis (1898–1963) was one of the intellectual giants of the 20th century and arguably the most influential Christian writer of his day. His major contributions in literary criticism, children's literature, fantasy literature, and popular theology brought him international renown and acclaim. He wrote more than thirty books, allowing him to reach a vast audience, and his works continue to attract thousands of new readers every year. His most distinguished and popular accomplishments include The Chronicles of Narnia, The Screwtape Letters, and Mere Christianity.

About HarperOne
HarperOne, a division of HarperCollinsPublishers, strives to be the preeminent publisher of the most important books and authors across the full spectrum of spirituality, healthy living, family & relationships, social change and personal growth literature, adding to the wealth of the world’s wisdom by stirring the waters of reflection on the primary questions of life and affecting authentic change.

Perelandra by C. S. LewisBook Two of the Space Trilogy

That Hideous Strength by C. S. LewisBook Three of the Space Trilogy