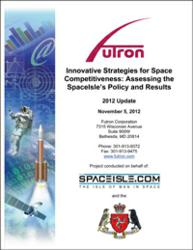 The 2012 results demonstrate how the unique government-industry partnership in the Isle of Man has fostered the development of a strikingly robust space industry, especially given the jurisdiction’s size.

Futron is pleased to release a benchmarking assessment that evaluates the space competitiveness of the Isle of Man. The Isle of Man’s space sector enjoys a competitive advantage against its peers which derives from the unique business model that the Manx government has adopted in developing the space sector on the Island. The study, an update of an analysis originally done in 2010, finds that the Isle has strengthened and grown its space sector.

“The 2012 results demonstrate how the unique government-industry partnership in the Isle of Man has fostered the development of a strikingly robust space industry, especially given the jurisdiction’s size,” notes Futron Space & Telecommunications Division Director Jay Gullish. “The Isle’s space industry continues to mature and branch out into new areas of activity.”

Futron’s findings indicate that there is a demonstrated stability in the space sector activities existing on the Isle of Man and that the jurisdiction continues to attract new activities and business. Key performance indicators include:

-- More than 22% of the objects on the U.K. Registry of Space Objects as of March 2011 are registered through Isle of Man companies.

-- The Isle of Man was one of only two compared jurisdictions where the number of space-related companies increased between 2010 and 2012.

These, and other results of the study, indicate that the Isle of Man continues to drive forward as a niche innovator in the global space sector.

The complete study "Innovative Strategies for Space Competitiveness: Assessing the SpaceIsle’s Policy and Results" is available for complimentary download.

ABOUT FUTRON
Futron Corporation is a premier provider of decision management solutions that improve outcomes for our clients by enhancing their ability to make complex choices. Our proprietary analytic models, methodologies, and data repositories transform information into intelligence. Our multidisciplinary, world-class team offers comprehensive knowledge of the aerospace, satellite, and telecommunications industries, with deep experience in statistical analysis, competitive assessments, forecasting, and strategy. Founded in 1986, Futron has a staff including policy analysts, management leaders, economists, regulatory specialists, and engineers. Futron is headquartered in Bethesda, Maryland, with offices in Houston, Texas, and Hampton, Virginia. The company’s Space & Telecommunications Division provides strategic market and technology advising services to global commercial and governmental aerospace enterprises.