SpellSpace.com Takes Tarot Reading Back to its Roots With a New Feature-Packed Spanish Version

Now in Spanish, SpellSpace.com launches a new feature-filled version of its fresh style of free Tarot for an even wider audience interested in Tarot readings and Spells. 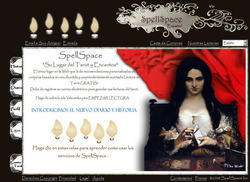 Readings are accurate beyond belief!! They are powerful and eye opening with uncanny revelations of what is really happening behind the scenes of someone's private world.

One of the only sites on the Internet to bring free Tarot readings in both Spanish and English, SpellSpace.com announces its latest version of a fresh take on an old art. Whether in English or en Español the wildly popular site now features a beautifully animated diary and enhanced saved readings.

Given Tarot's roots, it's appropriate that Spanish be SpellSpace's newest language. The ancient card reading technique emerged suddenly in Spain in the 1300s after wandering the deserts of Arabia for centuries, and being practiced with everything from a simple stack of playing cards to elaborately illustrated decks. Even then it took almost 600 years to gain wide acceptance and take on a reputation for divination throughout Europe and the states. Here, it was Spanish, Italian and French, who kept the cards and their mysterious meanings alive and gave shape to its current form as practiced on SpellSpace Tarot today.

Old World charm and latest Web technologies have been combined into the animated pages of the Diary which displays comments over time for saved readings and spell recommendations. Throughout SpellSpace, visitors can enter their thoughts and dreams into their Diary, and then turn the pages of what feels like a real book while recalling past tarot readings, recommended spells and pondering what the future may bring.

This combination of artistic presentation and deep geeky invention has attracted tarot newbies and connoisseurs alike, who have embraced SpellSpace as a daily destination. Here are just a few of the recent accolades:

"Readings are accurate beyond belief!! They are powerful and eye opening with uncanny revelations of what is really happening behind the scenes of someone's private world." Cheryl D.

"All I can say is wow! Your packaging is absolutely beautiful - it was such a treat opening the box and finding how lovely everything was….." Cyn D.

"Loved the spell kit, the packaging, presentation, everything, I think it is beautifully presented. I want to send some as gifts, thanks!" Denise N.

SpellSpace is becoming the destination on the web for free tarot and spells, not just because of its scarily accurate readings and beautiful presentation, but also because it's fun to explore and always has a new surprise -- like the Diary - just around the corner. And now, in a fitting historic twist, tarot on the web comes back to its roots, in Spanish.

Tarot DiaryAll personal notes about readings can be viewed in the Diary.

Save Reading and View SpellsRecommended spells and products suitable for your reading.