FIFA 13, poised to become one of the top soccer (football) games of all time worldwide, is available for preorder at SportsFanPlayground.com The game will be available on Xbox 360, Playstation 3, Playstation Vita, Nintendo Wii, Nintendo DS, Nintendo 3DS and the PSP. 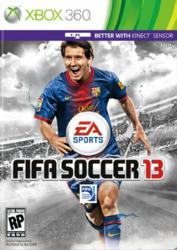 FIFA 13 is currently available for preorder at Myhotelectronics.com. The game ships on September 25.

The series, over a decade old, has established itself as the top franchise for international soccer games and has helped to develop interest in the game worldwide.

FIFA 13 has some of the deepest features in the history of the game in the 2013 edition. New features include the 1st touch control system, the ability to exploit 1-on-1 scoring opportunities, and a deeper career mode that allows for a player to control a player or manager in league, exhibition or international tournament mode.

Many people around the world look for apparel from their top FIFA-based league, such as the Barclays Premier League, MLS, etc. SportsFanPlayground.com, has many of the top soccer (football) jerseys from club and international teams around the world. Teams such as Real Madrid, Manchester United, and Chelsea are represented in the store, with jerseys from top stars such as Wayne Rooney, Kaka, Lionel Messi, Drogba, Fernando Torres being available at low prices.

The Sports Fan Playground is a leading online e-commerce provider of sporting goods, including items from the NFL, NHL, MLB, NCAA, UFC, WWE, NASCAR, and NBA. The store will also have classic signed memorabilia which will include balls, bats, jerseys, hats, gloves and other apparel. The store also carries many basic items for tailgating, golfing, bowling, workout gear and various other items for active activity.

Recently, SportsFanPlayground.com added a variety of electronics which range from tablets, PCs and cameras to video games, DVDs, Blu-Ray Discs, appliances, lawn and garden products, iPhones, iPods, iPads and more. The site carries top IT and office solutions from Cisco, Apple, HP, Microsoft and many other top brands available.The store recently began taking preorders on the upcoming Nintendo Wii U and its games and accessories.