From the raging North Sea to the seductive shores of Brazil, they work to build new lives. 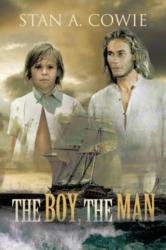 It’s all put to the test when they make the final push across the Great Divide.

From his quiet farm home in the north of Scotland, young James Gordon Cowen dreams of more than just a life tending sheep. When he’s offered the opportunity to join a Nantucket whaling crew, he signs on to set out for a new life. In Stan A. Cowie’s new nautical adventure, “The Boy, the Man” (published by iUniverse), James becomes a man as he experiences the worst the North Sea can throw at him. He also comes to know the meaning of true friendship.

On board, he and a new friend dive into life on the high seas, riding out ferocious deep-water storms in pursuit of the whale harvest. From the beautiful shores of Brazil to the mountains of New Caledonia, the crew battles the elements in search of their own goals. Once in America, they find themselves in the middle of the Mexican conflict while on a wagon train on the Oregon Trail. They try their hands at fur trapping and gold mining as they attempt to secure their share of the frontier’s bounty and do their best to avoid encounters with the dreaded Redcoats.

With hope as the only thing that keeps them going in some days, James and his companion clamber up out of a life of poverty to build new lives for their families in the New World.

Through it all, their friendship only grows deeper. It’s all put to the test when they make the final push across the Great Divide. In the New World, they find that they must make their own fate.

About the Author
At 15, Stan A. Cowie worked as an apprentice in the shipyards of his native Aberdeen, Scotland. Two years later, he began a five year stint in the British army. In 1967, he immigrated to Canada, where he still lives. “The Boy, the Man” began life on a tugboat off the west coast of Africa.

iUniverse, an Author Solutions, Inc. self-publishing imprint, is the leading book marketing, editorial services, and supported self-publishing provider. iUniverse has a strategic alliance with Indigo Books & Music, Inc. in Canada, and titles accepted into the iUniverse Rising Star program are featured in a special collection on BarnesandNoble.com. iUniverse recognizes excellence in book publishing through the Star, Reader’s Choice, Rising Star and Editor’s Choice designations – self-publishing’s only such awards program. Headquartered in Bloomington, Ind., iUniverse also operates offices in Indianapolis. For more information or to publish a book, please visit iuniverse.com or call 1-800-AUTHORS. For the latest, follow @iuniversebooks on Twitter.