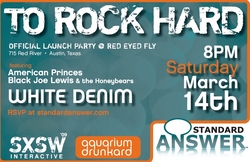 When you answer a question, not only can you see the entire site's responses in a graphic way, you can now filter that graph to see just the responses from the communities you belong to, your state, or just your group of friends.

StandardAnswer.com will officially launch with an all-music party during South by Southwest Interactive at 8pm on March 14th at Red Eyed Fly. RSVP is required and is available now at StandardAnswer's website. Also available are StandardQuestions which will determine the last song to be played by two of the performing acts - The American Princes and Black Joe Lewis.

The party will mark StandardAnswer's one month anniversary in public beta. "I can't believe it's only been a month," says Mark Erwin, StandardAnswer's CEO. "With the amount of improvements we've added and the number of new users, it seems like we've been live for at least a year."

StandardAnswer is a new social networking concept based on asking and answering questions in order for users to learn about their friends and to make new ones. Erwin explained one of the newest features based on early-user feedback. "When you answer a question, not only can you see the entire site's responses in a graphic way, you can now filter that graph to see just the responses from the communities you belong to, your state, or just your group of friends."

After the site's initial beta launch, Erwin began collecting feedback from direct emails, conversations will local users, and by using the site itself. StandardAnswer includes an entire category called, "Site Questions" and Mark has filled it with inquires about how to make the site better.

"I take that feedback very seriously and anything that's popular with users gets implemented very quickly," Erwin says; "hey, that's what a public beta is all about." And after a month, it's also about celebrating.

StandardAnswer is the official sponsor of South by Southwest Interactive's only all-music party being held on March 14th at 8pm at Red Eyed Fly. The event organizers are Aquarium Drunkard - a Los Angeles based audio blog with an avid readership. The party will feature Little Rock's American Princes and Austin's own Black Joe Lewis & the Honeybears and White Denim.

"We're really excited about the party," says Scott Simoneaux, Aquarium Drunkard's Director of Business Development. "Live music is about connecting with the audience and StandardAnswer is enabling that in a totally new and unique way." Would-be party-goers need to RSVP for the event on StandardAnswer.com and at the same time, they can cast a vote for the last songs to be played by both American Princes and Black Joe Lewis.