The mixtape is presented by Coast 2 Coast Mixtape Promotion and It’z Alive Entertainment. 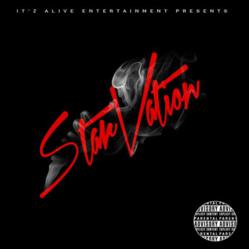 Hip-hop group StarVation has released their self titled mixtape “StarVation”. The 13 track project, presented by Coast 2 Coast Mixtapes, is now available for download. The mixtape features StarVation with appearances by Ojizz and Tracey Lee.

StarVation hails from Maryland. The group consists of members A-Boogie, Slim DeVito, Jaxx, and Gino Staxx aka Sling Shot who are all determined to bring their unique sound and message to hip-hop. Inspired by greats like the Notorious B.I.G., Tracey Lee, Jay-Z, and Nas, StarVation strives to bridge the gap between their generation and older crowds. They incorporate lyricism and elaborate production similar to legendary groups like Wu-Tang and A Tribe Called Quest.

To date, StarVation has been able to gain an international fan base. Their music has received radio play in Zambia, Zimbabwe, South Africa and more. They have been featured in various magazines including XXL Magazine's “10 Baltimore Rappers You Need to Know” section. The group works heavily with producer Orren “Ojizzonthetrack” Eaton and aim to build a movement based on solid music.

Determined to reach a bigger audience this year, StarVation plans to release several projects. Keep up with all StarVation updates by following them on Twitter. For any media inquiries contact Kobie Kiambu at info (at) broadviewcorp (dot) com.