Author Sven Michael Davison’s Post-Cyberpunk Thriller, “State of Mind,” a Chilling Depiction of the Near Future

Already 3000 patients with Parkinson’s disease have neural implants, Google is experimenting with computers that can drive cars, and there are more than 2000 robots fighting in Afghanistan alongside human troops. Is it an unimaginable step to take iPhones out of people’s hands and embed them in their skulls? 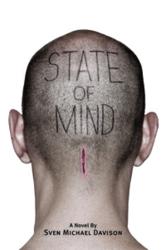 Your Thoughts Are Not Your Own ...

A recent article by Lev Grossman in Time magazine, "2045: The Year Man Becomes Immortal" foretells many of the themes Davison explores in his new book (published by Bedouin Press), launching next week.

“The science of my book is extremely plausible. ‘State Of Mind’ explores the moral and sociological dilemmas of a world described in Lev Grossman’s article and predicted by Ray Kurzwiel and the Singularitarians that follow him. It is also highly entertaining,” says Sven Davison.

Set in Los Angeles in 2030, “State of Mind” is a gritty tech-noir that examines the loss of freedom in a city that has been the setting for some classic post-industrial dystopias. Jake Travissi, the unlikely hero of the story is, after botching the arrest of the son of the governor, banned from the police force and then wins a rare second chance. The price: volunteer to have a computer chip implanted in his brain and join the Homeland Security experimental Enhanced Unit.

Davison wrestles with many of the most compelling themes of cyberpunk genre today: a near future world where the daily events of life are played out in a space where the boundaries between the virtual world and the real world have dissolved.

Brutally realistic, chillingly plausible, this novel manages to be both thought evoking and highly entertaining. A must read! -- Black Lagoon reviews, blacklagoonreviews.blogspot.com

“State of Mind” is an action-filled, engrossing journey across the tortuous emotional landscape of mind control, where nothing is quite what it seems for everyone involved. A must-read for Pin Heads and God Heads alike and for the casual observers.” -- Leonid Korogodski, author of “Pink Noise.

Check out the book trailer for "State of Mind" at http://www.youtube.com/watch?v=MsTAs2hvMSs

Sven has worked as a trailer copywriter at Paramount Pictures and a staff screenwriter for several other smaller production companies. He was head of 20th Century Fox’s World Wide Home Entertainment Content and Production Department for ten years. When not writing he consults for entertainment technology companies. This is his second novel.

Film options are currently being shopped and a graphic novel version of "State of Mind" is being readied for July Comicon in San Diego.

For more information about Sven and his book, visit http://www.stateofmindbook.com