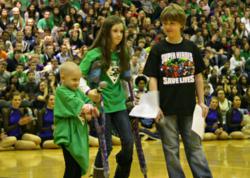 ...a way to inspire other kids my age and even adults to get involved in a good cause.

On March 15, 2013, approximately 3,000 kids, teens, and adults gathered at an all-school assembly at Downers Grove South High School to raise money for the St. Baldrick’s Foundation. St. Baldrick’s raises money to fund life-saving childhood cancer research. Approximately 42 students, staff, alumni, and community members participated in the St. Baldrick’s head shaving event, which raised more than $60,000 this year alone and a total of more than $180,000 for St. Baldrick’s throughout the past three years.

Families of children with cancer spoke at the Downers Grove South event to share their stories with the assembly and thank them for their generosity in participating in the annual event benefiting St. Baldrick’s Foundation. There were also performances by OnKore, the Downers Grove South hip-hop group; the Fillies dance team; Jonathan Woods, Mr. Mustang; and, the Steppers.

One inspiring speaker was Nate Pautsch, 10. Pautsch, a Downers Grove resident and 4th grade student at Lester Elementary School, participated in the event for the fifth year. Nate was empowered to inspire others to help fund life-saving childhood cancer research when his childhood friend, Mikayla Sweeney, was diagnosed with kidney cancer at the age of 5. Her struggle inspired Nate to take action and raise money for St. Baldrick’s Foundation.

On May 10, 2013, the Association of Fundraising Professionals Chicago Chapter will recognize Nate with the Outstanding Youth in Philanthropy Award. It was Mikayla’s grandfather, Chuck Coughlin, who nominated Nate for the philanthropy award. Mikayla says that thanks to Nate and “because of organizations like St. Baldrick’s, I have been in remission for four years.”

Nate says he is thankful for this award because it is “a way to inspire other kids my age and even adults to get involved in a good cause.” He even has some insight for other causes on how to increase involvement: “...tell people both the good stories and bad stories associated with your charity’s cause because it helps them understand the issues and the hope that comes with supporting it.”

Nate says he realized what an impact he could have in the world after appearing at the Downers Grove South annual assemblies and on the NBC news with Mikayla to talk about her story. People around town started recognizing him, and because of this, he was able to raise even more money for St. Baldrick’s and ultimately, to help find a cure for childhood cancer.

This is an annual event at Downers Grove South that students, staff, and the community look forward to each year.