The Steadman Philippon Research Institute recently released their latest annual report. This highlights the importance of the proactive treatment of conditions that lead to osteoarthritis and the development of new joint preserving techniques to delay or eliminate the need for joint replacement. With more than twenty years of clinical data to support its scientific research, this organization continues to significantly impact the way orthopedic medicine is practiced throughout the world. 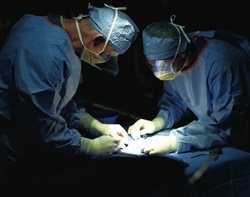 Joint preservation techniques, such as microfracture, are developed and validated at the Steadman Philippon Research Institute.

Osteoarthritis is the most significant cause of disability in the United States and Canada.

The Steadman Philippon Research Institute (SPRI) located in Vail, CO, has released their latest annual report. The report details the progress of medical findings based on evidence-based research into the specific causes, preventions and treatments of orthopedic disorders. This exploration of orthopedic research, which includes detailed reports relating to osteoarthritis and joint preservation, is pivotal in shaping the way orthopedic medicine is practiced throughout the world.

SPRI maintains a clinical research database that has been tracking hundreds of data points from every patient seen by The Steadman Clinic, some for more than 20 years. By querying this database -- the largest of its kind in the world -- SPRI's researchers can derive targeted insights into specific orthopedic disorders and conditions. This pairing of scientific research and clinical evidence with patient preference defines "evidence-based medicine", and it enables orthopedists to provide the best diagnosis and treatment to their patients while taking into account the level of performance that each individual would like to maintain.

As an example, in early 2009, the New York Yankees were into the new season and had just opened up their new multi-billion dollar stadium, their third baseman, Alex Rodriquez, was suffering from a damaged hip. Dr. Marc Philippon, a hip specialist and surgeon with The Steadman Clinic in Vail, was asked to make the diagnosis of Rodriguez's condition and propose a treatment plan. Because of the extensive database of evidence-based research at the Institute, Dr. Philippon was able to accurately diagnose the exact condition and create a surgery and rehab plan based on the vast evidence collected and analyzed through SPRI. This plan assured the Yankees' management that Rodriguez would be back early enough to have an impact on the season. In the end, the diagnosis, treatment and recovery were correct and Rodriguez went on to play in the 2010 World Series with a stunning performance, which was instrumental in the Yankees winning the Series.

Hip injuries among athletes are becoming increasingly common. Many of these injuries are the result of years of strenuous twisting, rotating and over-use, starting very early in youth sports. This can lead to hip-impingement which was the case with Rodriguez. The researchers and scientists at SPRI are studying this condition, which can cause pain every time a patient takes a step or participates in sports, because the femoral neck rubs up against the hip socket (the acetabulum); this usually leads to tears of the cartilage in the acetabulum. Years of clinical research have shown that state-of-the-art advances in hip arthroscopy and early intervention can be used to correct and repair this condition.

Another specific area of development in the diagnosis and treatment for common orthopedic ailments includes osteoarthritis and degenerative disease, which is documented in the report.

The U.S. Centers for Disease Control estimates that in the next 25 years at least 71 million Americans (up to 20% of the population) will have some form of arthritis, a degenerative condition of the joints, creating pain, swelling and limited movement for sufferers. Osteoarthritis, in particular, is at the forefront of this research.

Osteoarthritis is a debilitating and progressive disease characterized by the deterioration of articular cartilage accompanied by changes in the subchondral (below the cartilage) bone and soft tissue of the joint. Those suffering from osteoarthritis do so because of hereditary, degenerative changes within the body or as a result of a prior sports or traumatic injury.

Over years of study, scientists have been able to recognize that the body's innate healing powers can be harnessed and manipulated to improve the natural healing process. This research has led to exciting advances in treating conditions that can lead to osteoarthritis and new surgical techniques for joint preservation.

The surgical technique known as "microfracture", developed and honed by Dr. Richard Steadman, is one such advance that is now accepted as a treatment option to enhance articular cartilage healing. Microfracture makes it possible to postpone the degeneration of the joint that typically leads to osteoarthritis, which can delay or eliminate the need for joint replacement surgery. Joint replacement (i.e., hip, knee or total shoulder replacement) in itself is a highly technical and radical procedure to perform; but once this procedure has occurred, there are limited options, if any, to help treat further advancements of the arthritic condition should they reoccur. It has been estimated that, annually several hundred-thousand patients are treated with microfracture to repair chondral defects in various joints (i.e., hip, knee, shoulder).

Another technique pioneered and validated at the Institute, nicknamed "The Package", was performed on US Downhill Racing Champion and Olympic Skier, Lindsay Vonn, as well as Ken Griffin - founder and CEO of Citadel based in Chicago. This represents a series of arthroscopic procedures conducted during one operation designed to treat injuries in pre-arthritic and arthritic patients and to preserve joints.

Along with their significant accomplishments in pioneering joint preservation treatment options and new arthroscopic procedures to treat complex knee injuries and femoral impingement in the hip, SPRI is also recognized worldwide for evidence-based research on rotator cuff injuries in the shoulder. The CAM procedure (Comprehensive Arthroscopic Management) is a direct result of the Institute's shoulder research.

CAM, a procedure pioneered by Dr. Peter Millett, a shoulder surgeon at The Steadman Clinic, offers a very precise combination of surgical procedures that is aimed at treating all of the major pain generators in the shoulder. It has clinically been shown to decrease pain and improve function and can be performed in young, active patients with arthritis who wish to preserve their shoulder joints or in older patients who wish to avoid joint replacement surgery.

The Institute continues daily to collect data and publish clinically substantiated scientific research results on knees, hips, shoulders, and the spine. It has become the most published and the most innovative organization in sports medicine research and education and provides fellowship training programs for future physicians.

About Steadman Philippon Research Institute
The Steadman Philippon Research Institute (SPRI) is dedicated to keeping people of all ages physically active through orthopaedic research and education in arthritis, healing, rehabilitation, and injury prevention. Founded in 1988 by orthopaedic surgeon Dr. Richard Steadman as the Steadman Sports Medicine Foundation, the 501(c)3 charitable organization has influenced the practice of orthopaedics throughout the world. Based in Vail, Colorado, it has become one of the most published organizations in sports medicine research and education.