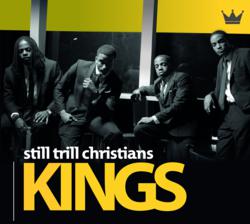 Your volunteer services demonstrates the kind of commitment to your community that moves America a step closer to its great promise "President Barack Obama, The White House, Washington DC"

Still Trill Christians (STC) are set to release their highly anticipated debut album entitled KINGS on April 30th. The album will be released by Still Trill Entertainment and Central South/Infinity Distribution nationwide. You may remember the “KINGS of No SEX” when they caught the attention of President Barack Obama who awarded them The President’s Volunteer Service Award for their song “No Sex” (http://news.yahoo.com/holy-hip-hop-group-still-trill-christians-recognized-20110323-070000-866.html). The song with a seemingly provocative, mainstream sound in fact sends a message to teens encouraging them to resist pre-marital sex.

“Your volunteer services demonstrates the kind of commitment to your community that moves America a step closer to its great promise”-
President Barack Obama, The White House, Washington DC

STC is made up of JT, Erupt, Prince AJ and Ace. After being the first christian rap artist to perform live on BET 106 & Park, airplay on numerous independent stations and garnering support across the country, the group has written and recorded their first album and is pumped to show the world what they can do. “We are ecstatic to be releasing new music,” said JT, member of Still Trill Christians. Mainstream media has acclaimed --

“I’ve never heard rap like this before, we have to get them on our show” -
Senior Writer BETs 106 and Park http://www.godtube.com/watch/?v=9EBFMJNU

Still Trill Christians are not just rappers or songwriters, they're national positive role models and the voice of this generation. STC's debut album "KINGS" will be in stores and all digital retailers April 30th. This album is set to be the most successful national release this year.