Study Spanish in Spain, Argentina or Guatemala and Save 25-33%

AmeriSpan Study Abroad has announced a new promotion called the "Get Free Weeks" special. Participants, who enroll in for a 4-week program, pay the 3-week fees (25% savings), and those who register for a 6-week program, only pay for 4 weeks (33% savings). The promotion is available for group language immersion programs in Argentina, Guatemala and Spain. 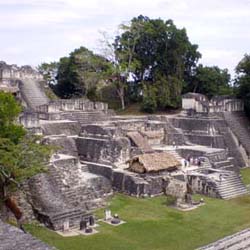 Ruins of Mayan City of Tikal in Guatemala

We chose to offer this special because these countries are very popular destinations, including our #1 program, Learn Spanish in Barcelona.

AmeriSpan Study Abroad, a leading organization, a leader in Spanish language immersion programs, has announced a new offer that offers students fee weeks of classes and accommodation. Participants will be able to save 25-33% when they chose to learn Spanish in Spain, Guatemala or Argentina. Participants, who enroll in for a 4-week program, pay the 3-week fees (25% savings), and those who register for a 6-week program, only pay for 4 weeks (33% savings). The promotion is available for AmeriSpan group language immersion courses offered at Argentina, Spain and Guatemala Spanish Schools.

Many students know that investing in a study abroad program is no joke. It takes a significant amount of time and money in order to complete. AmeriSpan's promotion is offering participants to maximize their investment by offering an extra 1-2 weeks free of charge. Lodging at host families or apartments is also provided free of charge for any extra weeks accrued. The requirements to receive the special offer require applicants to enroll no later than July 31, 2011, use the discount code of "Get Free Weeks" when registering for a program that starts after August 1, 2011 and finishes before the end of 2011.

"We chose to offer this special because these countries are very popular destinations, including our #1 program, Learn Spanish in Barcelona. Moreover, we believe that language students learn more by staying in a Spanish immersion program for more weeks rather than less weeks and more hours," explained John Slocum, AmeriSpan's co-founder.

Spain, Argentina and Guatemala are three countries that are famous for Spanish language immersion programs as well as a range of special activities that attract many traveling students. The Spanish language schools that are covered by the new promotion are located in Buenos Aires and Cordoba in Argentina, Antigua in Guatemala, and Alicante, Granada, Sevilla and Valencia in Spain. Argentina, home of the Tango, features sites of interest such as the Iguazu Falls, the Andean Lake District and Patagonia. Students taking up programs in Guatemala may visit the remains of the ancient city of Tikal, explore the great lakeside setting courtesy of Lake Atitlan, and go for a bargain-priced shopping spree at Chichicastenago. The entirety of Spain is home to many sites and interesting activities, which would range from great beaches in Alicante to discovering the essence of Flamenco in Granada.

Founded in 1993, AmeriSpan Study Abroad offers more than 100 study abroad, language-learning and volunteer programs worldwide for participants of all ages and language level. The Philadelphia-based organization has long been an innovator in the study abroad field, building its reputation by offering high quality, low cost language immersion programs. In 2011, the company was named a finalist for the "Innovators in Social Media" award sponsored by GoAbroad.com. In May 2011, the company was named a finalist for the Star Award as Best Agency in North America for the fourth consecutive year. The industry's prestigious Star Award is voted by organizations worldwide and awarded annually. AmeriSpan has received the award the past two years.