U.S. Senator Charles Schumer (D) recently called for swift action from the FDA concerning new clinical evidence of a link between topically applied Retinyl Palmitate and skin cancer in sunscreens, just in time for summer. Retinyl palmitate is a stabilized derivative of Vitamin A, used in over 500 popular sunscreens, but according to one emerging natural skin care company, the potential hazards reach far beyond sun care products. 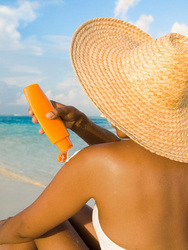 Vitamin A Retinoid Warning For Sunscreens

“The FDA's National Center for Toxicological Research and the National Toxicology Program have conducted studies that suggest a possible link between skin cancer and retinyl palmitate,” Schumer said during a recent conference.

Retinyl palmitate is a stabilized derivative of Vitamin A, used in over 500 popular sunscreens, but according to one emerging natural skin care company, the potential hazards reach far beyond sun care products.

“Sunscreens are just a small portion of the retinyl palmitate market. There are hundreds of other products that use it as an active ingredient including anti-aging serums, skin creams, cosmetics and even food products. We’ve always steered away from using retinyl palmitate or any of its synthetic vitamin A relatives, because the evidence for potential problems has been out there for years,” says Wayne Perry, lead product developer for Greensations, a natural skin care company known for their brands ThermaSkin, ThermaScalp and Youthful Trends.

Retinyl palmitate is a hugely popular skin care ingredient known for its anti-wrinkle benefits. Once absorbed into the skin, retinyl palmitate is converted to retinol and ultimately to retinoic acid, the active form of Vitamin-A known as Retin-A. Retinyl palmitate is also used as an antioxidant and vitamin A source that is added to many low fat dairy products to replace the vitamin content lost during the removal of milk fat.

Perry believes the link between retinyl palmitate and skin cancer has been suppressed because so many large skin care companies are using the ingredient in hundreds of popular and lucrative topical products.

“So many products use this ingredient, including a host of natural products that appear safe to consumers. If the FDA is forced to regulate its use in sunscreens, they’ll also have to follow suit with other skin care products, and this could cause major turmoil in the skin care industry. The entire family of retinoids will have to be taken under consideration including Retinol, Retin-A and the popular anti-acne ingredient Tretinoin,” Perry said.

While natural sources of vitamin A are shown to provide topical health benefits, concentrated synthetic versions have not been shown to provide additional benefits beyond nature. According to Perry, manufacturers use retinyl palmitate because it’s cheap and plentiful. He believes skin care companies should be using natural botanical sources to deliver vitamins and anti-oxidants instead of using chemically synthesized versions.

“Natural sources of vitamin A include green leafy veggies such as spinach and collard greens, as well as orange colored fruits and vegetables like oranges and sweet potatoes. Cayenne peppers are another excellent source of vitamin A that can be delivered topically, and you’ll find that ingredient in many of our skin care products. We only use natural botanical extracts because frankly, we don’t trust most processed versions. For instance, capsaicin is an awesome skin care ingredient, but we never use pure synthesized capsaicin. Instead we use natural resins derived directly from cayenne peppers,” Perry says.

The Environmental Working Group (EWG) has been at the forefront of this issue for months, warning consumers about retinyl palmitate and sunscreens in general. The non-profit group also focuses on other potentially harmful chemicals found in personal care products. Their website houses one of the most extensive and informative databases for personal care ingredients in the world.

The EWG recently published an open letter to the FDA on their website that states the following,

“The dramatically accelerated development of tumors and lesions in retinyl palmitate-treated animals, compared to untreated animals, has potentially significant implications for public health, which is why EWG raised concerns about the chemical in our 2010 review of sunscreen products. Sunscreen makers have added retinyl palmitate and related forms of vitamin A to 41 percent of sunscreens on the market this year, according to EWG analysis of ingredient labels for nearly 500 products. We are concerned that sunscreen industry consultants are attempting to downplay the relevance of the federal study”.

For more information about the dangers of chemicals in personal care products, visit the Environmental Working Group and Greensations online.