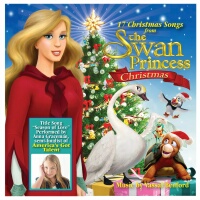 17 Christmas songs on the all new Swan Princess Christmas CD!

An enchanting story about the Christmas Spirit – Francine Brokaw, LAFamily.com

On November 6th, the “The Swan Princess Christmas” DVD will also be released exclusively through Walmart. “The Swan Princess Christmas” star – Princess Odette herself – is supported by two young “ladies in waiting,” who are no longer waiting for their place in the spotlight. Anna Graceman from “America’s Got Talent” and teen recording star Summer Eguchi bring their talents to the screen as Princess Odette’s singing voice talent and movie feature song artists.

This music is available on NestEntertainment.com, iTunes, in Walmart stores and at Walmart.com, and Amazon.com

About Nest Entertainment: From its origin over twenty years ago, NestEntertainment.com has become a leader providing entertaining and educational resources for the expansive family market. In addition to creating enriching stories and highest quality animated and musical productions, we have carved a niche as the nexus distributor between the wholesome Family Entertainment, Home Education and Christian markets through our proven Internet retail and wholesale distribution system.