The ceremony was honored by the presence of the ad interim President of the Republic, Pr. Dioncounda Traoré; Dr. Amadou Baba Sy, Minister of Mines; Members of the government and the President of the Chamber of Mines of Mali, Mr. Abdoulaye Pona, whose help was of paramount importance to this project. 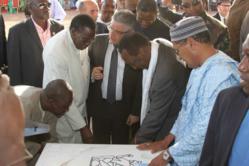 The many personalities and guests who attended the ceremony were pleased to learn that the foundation stone, especially chartered and sealed for the occasion, was coming from the same marble quarry in Italy, formerly used by the famous sculptor, Michel Angelo.

With a refining capacity of more than 20 tons per month, the Kankou Moussa refinery (KMR) stands for one of the largest and most modern gold refineries in the world. This investment represents a worldwide high-class facility, and by its choice to settle in Mali, the host country, it now allows the deployment of an industrial processing and promotion of valuable substances chain, which allows the fulfillment of local added values.

As pointed out by Mr Abdoulaye Pona, President of the Chamber of Mines, Mali is giving through this structure the signal for an ambitious sectorial strategy. As a matter of fact, the entire mining sector especially the gold mining, is dedicated to contribute to national economic growth. This is done here by offering to great West African mines the proximity of a powerful and modern technology platform and by allowing, under the auspices of the Chamber of Mines, the launch of a rationalization and modernization of traditional gold mining program as well.

Dario Littera, president of Swiss Bullion Company (http://www.sbcag.ch) strongly believes that the establishment of an industrial unit of gold refinery, with adequate capacity and global standards practices, can significantly contribute in the short term to the global supply in gold sector and to the improvement of the general welfare of African people.

In addition, given its strategic location on the continent, Kankou Moussa (KMR) can afford to recover a substantial portion of the West African gold production which is currently refined elsewhere. The industrial site which is launched today will be an excellent facility both for its logistics quality with access to air vector via Bamako - Senou airport, and its location on the suburbs of the Malian capital. It therefore represents a unique platform to serve the West Africa and other parts of the continent.

It is worth mentioning that the refinery is built according to the most rigorous international guidelines of environmental compliance. The project also complies with the local environmental policy. On the architectural point of view, the whole building will have a remarkable aesthetic designed by the famous architect and designer Luigi Colani who also designed the first stone. The building is also equipped with ultra-modern facilities and it is fully independent on the energetic plan.

Under the patronage of the Chamber of Mines, with the unfailing support of the Government of Mali and the enthusiastic reception of ADM (Airports of Mali), the country is proud of this forthcoming technological showcase on the African continent.

The Project Manager, KMR S.A Company, finances the entire refinery and will soon open a part of its capital to the Malian public and private sector. A special place is reserved for the Malian government, banks and Malian companies. It will also be possible for private individuals to acquire shares.

To follow up the building sequences of the KMR refinery, please see the link: http://www.sbcag.ch/kmr

Kankou Moussa refineryThe building is equipped with ultra-modern facilities and it is fully independent on the energetic plan.