Swurve.com promises to pick up where the sexual revolution left off, releasing a casual personals community that caters to both sexes. 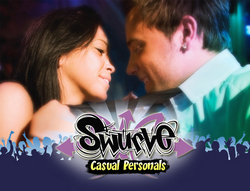 Swurve.com, a network where users categorize their ideal relationships as Friends with Benefits and No Strings Attached, operates on the concept that women should be as free as men to explore their sexuality without encumbrances.

The new site claims to pick up where the sexual revolution left off, creating a casual, judgment free environment where women can openly explore a less committal variety of relationship options than those offered on traditional dating sites.

In a study released earlier this year by the University of Minnesota, researchers found the emotional well-being of individuals who listed their most recent sexual encounter as one involving a casual partner to be as stable and emotionally healthy as participants who were involved with long term partners. Both sexually active men and women were polled in the breakthrough study which found there to be no detectable differences between the emotional and psychological health of those who engaged in casual sex when compared those who limited themselves to sexual activity within the confines of committed relationships.

"Whatever the motivation, there is a growing segment of the female population that isn't as intent on finding Mr. Right as they are interested in finding Mr. Right now. What I've set out to accomplish with Swurve is to create a community where women could comfortably explore and embrace their sexuality in an environment that is not abrasive and vulgar to feminine sensibilities," she continues, "and that's what I feel we've accomplished."

Swurve offers a no hassle registration that allows users to quickly create a profile that expresses their sexual identity, relationship status and expectations. The casual personals community does not require a credit card to join and once a member has validated their email address they can begin browsing photo profiles of users in their area, making connections & flirting with other users 100% free.

As the hottest hook-up site for singles seeking casual relationships, Swurve provides users a unique connection building platform through which members can embrace their sexuality and explore their desires in a judgment free environment. The groundbreaking online community caters to men and women seeking casual encounters across the United States, Canada, the United Kingdom and Australia.