Team Detroit at SXSW: The Power of the Idea and the Work We’re Doing in Detroit

Team Detroit invites attendees of SXSW to its panel discussions with leading industry experts: How Do You Make the Future a Better Place? 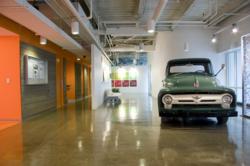 People who come see our event will discover we're a very different Detroit than we were five years ago. Our cars have better MPG than Toyota’s and our pickles are tastier than Vlasic’s.

This year, one of the biggest agencies in the Midwest is hitting the one of the biggest events in the Southwest to show Austin that there’s more to Detroit than motors and Motown. Team Detroit, the agency of record for Ford Motor Company, will open SXSW with a sanctioned event at Wanderlust Yoga Studio on March 8 that includes executives from Ford Motor Co., iconmobile, Hipcricket, Digitaria, Somo Global and, of course, Team Detroit.

The four-hour event is called the Tech Lab and will focus on emerging trends in communication, automotive technology, and advertising/marketing. Team Detroit, which recently produced such work as Doug the Puppet for the Ford Focus, the Fiesta Movement, reality TV integration Escape Routes for the Escape and "Coast to Coast,” (the first TV commercial shot wholly by the audience watching a live event for the Focus ST), will host three panel discussions during the lab.

Toby Barlow, Chief Creative Officer for Team Detroit and active Detroit supporter commented: "People who come see our event will discover we're a very different Detroit than we were five years ago. Our cars have better MPG than Toyota’s and our pickles are tastier than Vlasic’s."

The three panel events are:

In an increasingly fragmented landscape, how do you navigate through all of the new technology and keep your message from getting lost in a sea of communication? This demonstration focuses on ways to utilize emerging technologies and devices to reach your target, focusing on practices in digital and social media through Mobile and Tablet devices.

Lessons from a Futurist

No one can predict the future; but that doesn't mean you can't prepare for the unknown. Ford Motor Company's in house futurist will share how Ford is learning to expect the unexpected using global trends and scenario planning.

Catching consumers when they have time for us is becoming more complex. Now we have to chase them around on their laptops, tablets and, increasingly, their smart phones. As the screens have evolved, so has the message itself. Consumers expect to interact with it in a way that's appropriate to whatever technology they're using at that moment.

For more on Team Detroit and the Tech Lab, visit sxsw.teamdetroit.com.