In a commemoration of International Women’s Day on March 8th, SEO would like to honor every Syrian woman that has contributed, sacrificed, and suffered the last two years of Syrian revolution. 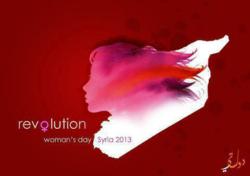 In a commemoration of International Women’s Day, SEO would like to honor every Syrian woman that has contributed, sacrificed, and suffered the last two years of Syrian revolution.

SEO stresses the remarkable role Syrian women have been playing in restoring freedom and dignity. They have risked their lives and stood in solidarity with the people of Syria seeking freedom. “Women and girls were in the forefront when the uprising began nearly two years ago with peaceful protests,” the Washington post said, describing the role of Syrian women in the revolution.
http://articles.washingtonpost.com/2013-01-10/world/36323372_1_syrian-people-suhair-atassi-aleppo

SEO believes that the plight of women in Syria has reached a catastrophic level, warning that the continuing strategy of inaction will impose large scale short and long term consequences extending beyond women, to affect the whole social and economical framework of the country. SEO reiterates International Development Secretary Justine Greening’s warning that, “women and children risk becoming the 'forgotten victims,' as refugees cross the border in the thousands every day.“

"On International Women’s Day, we honor Syrian women for their remarkable contributions and sacrifices; they are the backbone of the Syrian revolution. In the past two years, our beloved sisters in Syria have been subjected to and continue to experience human rights violations; ranging from exposure to brutality, torture, rape, detentions, and death. Despite the extremely harsh conditions Syrian women face, they are continuing to overcoming obstacles and have not lost sight of the ultimate aim of achieving freedom for all Syrians.” Rasha Othman, SEO- PR Chair, said, “With the number of refugees hitting the one million mark, we must note that half of these refugees are women. It vitally important that women continue to be a focal point of humanitarian and rebuilding efforts. The future of Syria depends on the strength and well-being of its women.”