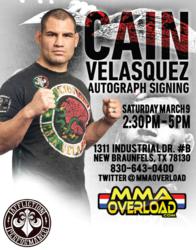 Locally owned retailer of Mixed Martial Arts clothing and fight gear MMA Overload has recently announced that they will be hosting an autograph signing featuring UFC heavyweight champion Cain Velasquez. Velasquez (12 wins, 1 loss, 0 draws) who most recently avenged his only defeat this past December by scoring a 5 round, unanimous decision win on pay per view versus Junior Dos Santos and is now widely considered the #1 heavyweight fighter in the world.

Velasquez, known for his powerful striking, decorated wrestling background, and unparalleled cardio; will be signing 8x10 photos and taking pictures with fans. Fans will also have the opportunity to gain entry to the special VIP line by purchasing his walkout shirt (which may also be autographed) at the event. This is recommended as the VIP line has priority over the general public line and MMA Overload expects a very large turnout for the autograph signing. Due to contractual obligations, fans will not be able to bring items from home to be signed.

About MMA Overload
MMA Overload is located in New Braunfels, TX and is an online e-commerce retailer which sells Mixed Martial Arts Clothing, Fight Gear, & Supplements. They offer thousands of products by leading brands, competitive prices, and fast shipping. Whether you're a casual fan, hard-core fan, fighter in training, or a seasoned veteran of the sport, you’ll enjoy your shopping experience at MMA Overload.