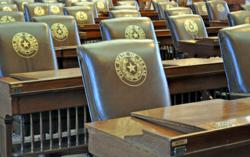 A number of these individuals have not spoken publicly before because of their fear of possible further legal entanglements and retribution.

Yesterday at the Texas Capitol, the House Committee on Human Services heard public testimony on House Bill 1536, an act relating to a Medicaid provider's right to an administrative hearing on an action taken by the office of inspector general for the Health and Human Services Commission to recover overpayments under the Medicaid program. The bill is co-authored by Rep. Bobby Guerra of District 41 and has received bipartisan support of 15 other Reps.

The legislation will provide for the State Office of Administrative Hearings to hear OIG overpayment hearings against Medicaid providers accused of fraud or overbilling the program. Currently, such hearings are held in the HHSC appeals division. The point of the bill is that HHSC-OIG is investigator, prosecutor and judge with a vested interest in finding against the provider. No other state agency has such power. The bill also provides, if the SOAH judges rules against a provider, for a judicial appeal for a trial de novo in Travis County Court if the amount in question is more than $50,000.

Testimony on the bill went on for four hours and the bill received support from the Texas Academy of General Dentistry, the Texas Hospital Association and Texas Medical Association.

TDMR has placed a number of the written submissions on their website given to the Committee by various dentists and lawyers in support of the Bill and the excesses of the current enforcement regime.

“We are advertising these submissions on our website because legislators and the public-at-large are unaware of the what is going on beyond the façade of loud and persistent allegations of Medicaid fraud in Texas,” comments Chuck Young, newly named Director of Communication for TDMR. Young founded Texans for Accountable Government. "A number of these individuals have not spoken publicly before because of their fear of possible further legal entanglements and retribution."

The following submissions are available:

The following can be reached on the TDMR website:

“Sunlight is the bane of authoritarianism and we are bringing the sunlight to this unconscionable situation for dental Medicaid providers. They deserve fair treatment and due process to separate the guilty from the innocent. Punish the guilty, absolutely. Not the innocent,” concluded Young.