Contentious Novel Supposes that Christ's Descendants Could be Kashmiri Separatists

A new historical fiction thriller "The Rozabal Line" by Shawn Haigins has claimed that Jesus Christ may have survived the crucifixion, traveled to Kashmir and that his present-day bloodline could possibly be fighting an Islamic Jihad in the ongoing strife along the Indo-Pak border. 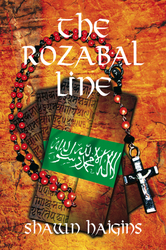 While recent alternative theories have revolved around the Holy Grail and the travels of Mary Magdalene to France, the wealth of historical and religious information linking Jesus to India has remained relatively obscure and I hope that this book will bring it to the forefront

A "Da Vinci Code" type potboiler has claimed that the body that lies in the Rozabal tomb in Srinagar (Kashmir) is actually that of Jesus Christ.

The novel, though a work of fiction, contains a wealth of historical, religious and spiritual suppositions. Haigins claims that Jesus spent his "lost years" in India because India was his spiritual home given that one of the ten lost tribes of Israel had settled down there. The book claims that Jesus derived much of his wisdom from Buddhist teachers and that Mary Magdalene was possibly a temple priestess originally from "Maghada" the ancient Indian Buddhist empire of North India.

The Rozabal Line also explains why it is possible that the Church-promulgated official persona of Christ could have been based on the Hindu deity Krishna. The author establishes his plot on the premise that Jesus was married to Mary Magdalene and that his bloodline may have converted to Islam during the early Muslim incursions into India. The author has then weaved a modern tale in the post 9/11 world of Osama, Al Qaeda and Waziristan.

Blending a commercial fictional plot with historical nuggets such as the commonly accepted view that St. Thomas, one of the twelve apostles, was specifically sent by Jesus to India, Haigins builds up a case to put forward the possibilities that the patriarchal figure of Abraham was loosely derived from "Brahma" the ancient Indian god of creation; that the "sacred feminine" was largely a Hindu concept; and that the trinity of the father, son and holy ghost, was actually derived from the ancient Vedic trinity of the creator, the nurturer and the destroyer. He explains why it is possible that the ritual of baptism was born along the banks of the river Ganges, and why "Spikenard" which was used by Mary Magdalene to anoint Christ was a sacred Indian herb. Haigins explains that the "three wise men" were nothing but Buddhists searching for "an incarnation" of the Dalai Lama, much in the same manner as is done today.

The Rozabal Line does not claim to be historically accurate. Shawn Haigins has clarified that he wanted to spin a racy thriller that could, in parallel, highlight an alternative theory surrounding the life and death of Jesus and Mary Magdalene. "While recent alternative theories have revolved around the Holy Grail and the travels of Mary Magdalene to France, the wealth of historical and religious information linking Jesus to India has remained relatively obscure and I hope that this book will bring it to the forefront," said Haigins.

Even though the book has been released recently in mid-October, it has already notched up significant sales on Amazon.com and has generated considerable interest among the "conspiracy theory" aficionados and religious/historical fiction buffs. Traffic to the author's blog has spiked several times over and Haigins has been overwhelmed with the number of people writing in.

In Srinagar, the Rozabal Tomb has already become an important tourist destination, particularly after Suzanne Olsson's effort to extract DNA from the body buried at Rozabal. Holger Kersten's research summarized in his book "Jesus Lived in India" has also helped popularize the destination.

The Rozabal Tomb in Srinagar that is at the heart of the controversyPresent-day shrine in Srinagar, Kashmir, India