A mix of retro-tinged pop and soul defines the sound of Christopher Moll's latest project. 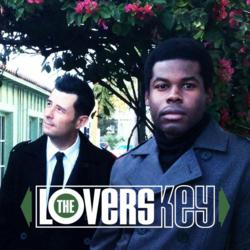 Christopher Moll and Maco Monthervil of The Lovers Key

This music came from our creative frustrations, our eagerness to push forward and really, our sincere love of timeless music.

Formed in the late fall of 2012, The Lovers Key evolved from the restlessness Christopher Moll felt after a long period of self-imposed inactivity with his band, The Postmarks. “After the success of our last album in 2010, I needed to take a break and recharge my batteries. I had felt a growing need to express myself musically in a fashion that was more raw, and energetic, and I thought a way forward might be for me to get back to basics. So, I made a plan to retreat and sort through what that meant to me.”

Retreat he did, and while he was drawing up his plan and hunkering down, he never expected it would take two years for his new music to materialize. ‘‘It wasn’t so much writer’s block as it was chasing after something in my heart that I had trouble putting my finger on. It was majorly frustrating as I knew I had this feeling inside me that something creative was starting to brew. Trying to work through that, and convey that to others just led to many disappointments and dead-ends, and I really began to feel like I was chasing my tail. One day, I just let go and said ‘whatever will be, will be.’”

And that’s when a soulful young vocalist named Maco Monthervil entered his life.

Answering an ad that Christopher had placed, Maco (pronounced “Mah-Ko”) was only looking for work as a backing vocalist and was happy enough to have found someone who was just looking for a singer. “I had just had a really bad experience with another producer; he didn’t know what to do with my voice so he told me to become a waiter and a backing vocalist instead, to support myself…and a week later, he stopped talking to me.” The experience, along with several other unrealized ventures, left Maco disillusioned. “Everything was falling apart…no matter how promising the collaboration seemed, it failed.”

Maco, who started performing at age six, spent his childhood singing but decided to concentrate on it as a career choice in his teens. “Once I became serious about it, people started to take notice, but they always saw me as some R&B/Pop sensation…and I can’t dance…nor do I sing falsetto.” He continues, “I’ve always had a different way of using my voice…most likely because my tastes have always leaned towards older pop and soul records. I just needed someone to let me know that it was ok to sing the way I do, and could help bring to the forefront and frame correctly what was already there.”

So, Maco answered the ad, simply writing Chris “I love the musical influences you’ve listed…I’m a singer and even if you’re not interested, please just write back.” Chris wrote back within 5 minutes and Maco laughs: “The rest, as they say, is history…”

A mix of retro-tinged pop and soul, the music of The Lovers Key plays like a great big box of vintage records, well worn and a little ragged around the edges but full of warmth and heart. Maco’s voice, defiantly soulful and jazzy, weaves through Moll’s rough-and-tumble vintage fuzz guitar and organ arrangements, as he croons, shouts, and even whimpers the lyrics as if his life depended on it.

Currently, The Lovers Key are working on their debut album with expectations of a 2013 release.

Christopher concludes, “I can tell you it’s been quite liberating working with Maco and allowing this new music to blossom in a way that, just feels right. I think the key to musically moving forward was finding someone who equally understood the importance of writing from a place of love where the message just feels direct, honest and sincere.” Maco quietly, but confidently adds “I answered that ad ‘cause I wanted to tell Chris that I like minor chords too…from there, to this. I’m exactly where I need to be, and wouldn’t trade what Chris and I have built for anything in the world. This music came from our creative frustrations, our eagerness to push forward and really, our sincere love of timeless music.”

About the Artists: The Lovers Key is a pop-soul band based out of South Florida and comprised of singer-songwriter, Maco Monthervil and songwriter-musician-producer, Christopher Moll. Moll's previous band, The Postmarks toured the US and Europe with notable appearances at CMJ, SXSW, Lollapalooza festival and featured on Nickelodeon's hit kids show, Yo Gabba Gabba!.

The Lovers KeyA preview of songs from their debut album