Office workers caught in a rut in drizzly Europe often dream about escaping the 9-5 for a carefree, vagabond lifestyle in exotic South East Asia. No-holds-barred new travel book ‘This Is Thailand’ by Marek Lenarcik gives readers the chance to experience the ups and downs that an escape to the tropics really involves - from the comfort and safety of their own desk. 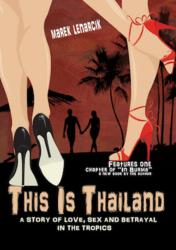 'This is Thailand' by MAREK LENARCIK

This book been written for those that are curious about the world, Asia and Thailand...It’s the most fascinating moments from my 18 months of living in Thailand, all collected in one book. It’s a book for dreamers and travelers alike.

Author Marek Lenarcik’s decision to give up all of the material things he collected – flatscreen TV, sofas, a nice car – and trade them for an unknown life in a strange, exotic land sounded like every single man’s dream. On paper. He quickly finds what he’s looking for: a lifestyle involving beautiful women and easy-living. But he also gets more than he bargained for. Lenarcik details his journey in his new book, ‘This Is Thailand’.

Traveling through Thailand’s exotic locales, Lenarcik’s desire to experience Thailand’s forbidden fruits leads him to a gorgeous, kind, independent Thai girl who, he is convinced, might well be the “one”. But as he immerses himself deeper into this strange country and all its inexplicable worldviews and customs, he begins to discover a much darker and complex side to the Land of Smiles and her inhabitants. Soon, ‘the one’ begins to reveal her true colors. Before he knows it, Marek is ensnared – as have many men before him – by the dreaded Honey Trap. This stormy relationship acts as a fascinating backdrop to insights into Thailand’s unique culture that stem from the author’s efforts to come to terms with the reality of this land and the people who call it home.

“This book been written for those that are curious about the world, Asia and Thailand. It does contain a fair bit of sex, but any story without that and about Thailand would be a lie,” said Marek Lenarcik. “It’s not a travel story. It’s the most fascinating moments from my 18 months of living in Thailand, all collected in one book. It’s a book for dreamers and travelers alike.”

Tourist mecca Thailand acts as a key character in this brave travelogue, a best seller in the author’s native Poland. A truthful description of the reality of life in Thailand beneath the surface is captured by a man who got caught up in it and escaped before ‘Bangkok got him’. A must-read for those dreaming of a better, hedonistic life on ‘the other side’.

‘This Is Thailand’ was converted to ebook format by eBookIt.com and is available from Amazon’s Kindle Store.

About The Author
For as long as he can remember, traveling has always been an important part of Marek Lenarcik’s life. If he had to burden anyone with that particular aspect of his personality, that would have to be his parents. They took him to Bulgaria when he was five, and packed him off to all sorts of youth camps around Europe during his teens. If they wanted to see more of him when he was grown up, they could only blame themselves.

A corporate lifestyle in Dublin enabled him to fulfill a life-long dream of driving across USA, check if Iran is really as bad as people say, and taste the forbidden fruits (natural or otherwise) of Thailand.

This last trip changed him entirely, and within a few months of returning, he put in motion a plan to return to the Far East, this time for good. His 18 month experience in Thailand is chronicled in the book “This Is Thailand: A Story of Love, Sex and Betrayal in the Tropics.”

After life in Thailand became too much, Marek traveled as far away as he could to South America before returning to Asia, first to Kuala Lumpur, before moving to Myanmar, where he currently resides. He is currently working on his second book “In Burma”, which tells the story of his experiences in the country shortly after the country began to open up to the rest of the world.