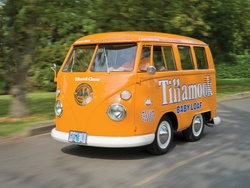 Tillamook Cheese is the best-selling natural cheese brand in the West, but people across the country may not have experienced it. We know that once people taste our cheddar, they will become passionate fans.

How much do you "loaf" Tillamook® cheese? To share the love of the Tillamook Baby Loaf, Tillamook® Cheese will roll out a Loaf Love Tour with the mission of bringing its tasty cheddar to the people. The Loaf Love Tour kicks off in January 2010 in Tucson, Arizona and will travel to more than 100 cities in 9 states in the Western U.S., as well as Illinois and Texas.

"Tillamook Cheese is the best-selling natural cheese brand in the West, but people across the country may not have experienced it. We know that once people taste our cheddar, they will become passionate fans,” says John Russell, Senior Director of Marketing for Tillamook Cheese.

The Loaf Love Tour consists of a trio of mini-buses that were retrofitted from 1966 Standard VW Microbuses to resemble Baby Loafs of Tillamook cheddar. The trio of Baby Loaf buses will stop at grocery stores, neighborhoods and special events to spread the love of Tillamook’s cheddar to consumers. Loaf Love Tour attendees will have the chance to sample Tillamook Medium and Sharp all-natural cheddars, made in the Pacific Northwest using only the highest-quality milk from cows not treated with the artificial growth hormone rBST.

In addition to cheddar samples, Loaf Love Tour attendees also will receive free recipes, coupons and other Loaf Love giveaways, as well as the opportunity to join the official Tillamook Fan Club. Two daughters of Tillamook dairy farmers, who also were Tillamook County dairy princesses, will join the Tour as brand ambassadors and share their passion for the Tillamook Baby Loaf.

About Tillamook County Creamery Association
The Tillamook County Creamery Association, formed as a farmer-owned co-operative in 1909, has earned a reputation as one of the nation’s premier makers of cheese. TCCA is a national marketer of naturally aged cheddar and a variety of other cheeses, butter, and an extensive line of premium ice cream, sour cream and yogurt. TCCA is most famously known for its internationally award-winning Tillamook® cheddar cheese. For more information visit our Web site: http://www.TillamookCheese.com.