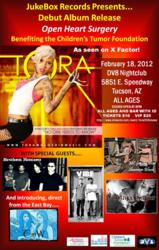 These children, as well as our own, are our motivation, inspiration, and calling, leading us to reach out to others and raise awareness about NF.

Three months ago, Tora Woloshin had no idea that the giggling baby dancing to her X Factor performance in a fan video was anything other than a cute and happy toddler. http://www.twitvid.com/V9H6S According to her record label, JukeBox, it wasn’t until weeks later while looking for a charity beneficiary for her CD release party, that Tora learned 15 month old Caleb was afflicted with Neurofibromatosis (NF). NF is a common neurological disorder that can cause tumors to grow anywhere in or on the body and can result in cancer, blindness, deafness, bone deformities, loss of limb, and scoliosis. Tora knew that she and Caleb were brought together for a very special reason. On February 18th, Tora and her label, JukeBox Records, will celebrate the release of her LP, “Open Heart Surgery” at DV8 Nightclub in Tucson with a concert, party and fundraiser for Children’s Tumor Foundation (CTF), an organization dedicated to improving the health and well being of individuals and families affected by NF.

Caleb isn’t the only one in his family diagnosed with NF. Caleb’s 10 year old sister, Marisol, and their father, Conrad, are also afflicted with the disorder that affects more than 1 in every 3000 children born. Currently, there are no treatments and no cure for NF and it strikes people of all races and ethnic origins worldwide and both sexes equally. “So far, their NF related problems are minimal, but it is scary that one day the problems could become life threatening," said Conrad Cordova, Marisol and Caleb’s father. "Through a support network we developed, we have met many families with children just like Marisol and Caleb right here in Tucson. Some of these children have serious complications such as brain & spinal cord tumors, limb amputations, and learning disabilities. Through Children's Tumor Foundation, we have met many families with children with catastrophic variations and cancer. These children, as well as our own, are our motivation, inspiration, and calling, leading us to reach out to others and raise awareness about NF. Sadly, in the past 4 years we have lost several friends across the country that battled courageously against this disorder.”

The goal of Tora’s CD release party is to raise dollars and awareness that are targeted to finding new treatments for NF. MC’d by Shannon Black from KiiM FM, the ALL AGES event begins at 8PM and will feature a short video about NF in addition to entertainment by Tora and her dance crew, special guests Broken Romeo and Vintage Sugar from Tucson along with VIBE and CMW from California. A dance party with DJ Brandon immediately follows the show. In addition to a portion of CD and merchandise sales, over half of each $10 ticket purchased will be donated to CTF. Tickets can be purchased from performers or online at http://www.showclix.com/event/ToraCDRelease .

About The Children’s Tumor Foundation
Founded in 1978, The Children's Tumor Foundation is dedicated to improving the health and well-being of more than 100,000 Americans living with neurofibromatosis (NF). Our research program has played a key role in the discovery of the genes that cause NF, understanding the biology of NF, creation of the NF Clinic Network, and preclinical screening of drug compounds that appear promising in treating the disorder.

About Tora Woloshin
Tora was one of the top 8 girls selected by Simon Cowell to advance to the top 32 on the opening season of X Factor USA. She also won the second season of Lucky Break, a local “American Idol” style competition that is televised on KOLD on Saturday nights. Tora grew up in Tucson and began her singing career at age 6 with the national children’s group, Sunshine Generation. Later she graduated to musical theater, dance and group and solo vocal performances with the non-profit Tucson group, Kids Unlimited. She spent most of her childhood with Kids Unlimited and received instruction in dance, vocals, acting and musical theater. As a teenager writing and performing her own music, Tora fronted three of Tucson’s most recognized indie rock bands, including LESS THAN FAMOUS, before moving on to concentrate on a career as a solo artist.

About JukeBox Records
JukeBox Records is a family owned enterprise started in 1999 to provide support and direction to Tucson’s independent music artists.

Tora with Caleb and Marisol Cordova