NitroDesk Inc. announced that they have released the next generation of their TouchDown product as a priced application in the Android Market. The new version adds Push Email support for Exchange servers as well as support for PIN based security and Remote Wipe of Exchange data. 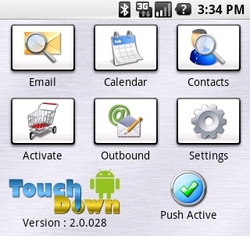 NitroDesk Inc., today announced the availability of the push-enabled version of TouchDown as a priced application on the Android Market. TouchDown is a leading commercially available Exchange synchronization solution for Android powered handsets and devices. In the new version, TouchDown will provide users with the ability to receive emails in real-time from exchange servers that have ActiveSync enabled on them. This include Microsoft Exchange Server 2003 SP2 and Microsoft Exchange server 2007 installations. In addition to the possibility of receiving real-time email notifications, the new version also enables PIN based security and Remote-Wipe of Exchange data to provide administrators and users with new ways to secure the information downloaded to the device from the exchange server. For the adoption of Android powered handsets in the enterprise space, such features are normally considered critical.

"I love the G1, but honestly couldn't part with the mobile email capability offered by my old phone/PDA; The G1 was a nice toy, until now. Touchdown provides the exchange interaction I've been looking for to finally swap my phone for a G1 as my only mobile phone/PDA. The software works quickly and operation is intuitive and user friendly. This is THE Killer App for the G1" said William Hurt, an Enterprise architect at a large telecommunications provider.

"From the day we released TouchDown, we have been asked by our users for Push support. Now with the ActiveSync license, we are excited to have solved that challenge. We are grateful to all our early adopter and beta customers for providing constant and valuable feedback on the product to make it the most popular exchange synchronization solution for the Android Platform," said Goutham Sukumar, founder of NitroDesk Inc.

The new version of TouchDown appears in the Android Market in two parts. The primary application is named "Exchange by TouchDown", and provides a 5 day full trial functionality. After 5 days from installation, the program will provide limited read-only functionality. New customers can activate TouchDown by purchasing and running a second application named "TouchDown Pro License" (currently introductorily priced for a limited time at USD $29.99). As new versions are released, existing customers can simply upgrade by installing the "Exchange by TouchDown" application without any additional fees.

About NitroDesk Inc.:
Founded in May 2008, NitroDesk Inc is the developer of the popular TouchDown application which lets users synchronize their Android-powered handsets and devices with corporate email, contacts and calendar on their Microsoft Exchange Servers. NitroDesk currently operates its head office in Sammamish, Washington.

About Android:
Android is a complete, open mobile phone software stack. It includes everything a manufacturer or operator needs to build a mobile phone. Android is available as open source via the Apache v2 license, and it was designed from the ground up to enable the best user experience possible on a mobile phone. It leverages web and Internet content to provide advanced services such as mobile mash-ups and location-based applications for example.

Brand Name Disclaimers: Microsoft, Exchange, G1, T-Mobile, ActiveSync may be trademarks of respective owners. NitroDesk is not owned partly or fully by any of these entities.