Traffic Logix has announced the launch of two radar speed signs to complement the company's successful line of recycled rubber traffic calming devices. Radar speed signs are interactive signs that give drivers' feedback on the speed that they are traveling at. They have proven to effectively reduce traffic speeds by making motorists aware when they are driving at unsafe speeds. Radar speed signs are often used on residential roads as well as in school zones and construction areas. 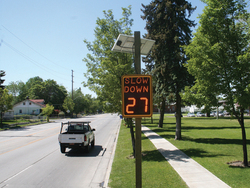 Radar speed signs are interactive signs that give drivers' feedback on the speed that they are traveling at. They have proven to effectively reduce traffic speeds by making motorists aware when they are driving at unsafe speeds. Radar speed signs are often used on residential roads as well as in school zones and construction areas.

The next generation speed signs use unique, patented optical technology unlike any other sign on the North American market. The system is constructed of a series of lenses which magnify the light of each LED. This allows the LEDs to operate at only 30% of their power while supplying optimal luminance even in poor visibility conditions. The system significantly increases the optical efficiency, reliability, and lifetime of the signs. The LEDs have also been innovatively positioned behind the sign panel to protect them from vandalism.

The Traffic Logix signs are equipped with several other innovative features. A focused viewing system directs the light toward oncoming vehicles while dimming the sign to other lanes to avoid motorist distraction. The optical system refracts sun rays away from the sign to provide intense light even in bright sunlight.

When a motorist is traveling at or below the speed limit, the speed is shown as a solid number. If the vehicle is speeding, the displayed speed blinks. An upper threshold speed can be set to cause the sign to go blank above a specified speed. The built in software allows cities to choose the speed settings that meet their individual needs.

Each sign is equipped with Bluetooth wireless technology. This allows for quick and secure downloads from the sign to a computer. A built in traffic counter stores information regarding vehicle data such as the number of cars, 85th percentile, and minimum, maximum and average speeds. This data is then transmitted to a computer using Bluetooth technology to allow for review and analysis.

The signs can be powered either via power grid or independently by solar panel and battery. Installation is simple since the battery and all other sign components are stored within the actual box, unlike other speed signs which store components in several boxes.

The Traffic Logix radar signs are available in two models. A standard sign displays "Your Speed" in block letters. A more sophisticated second model offers variable messages displayed in LED letters including "Your Speed," "Slow Down," and "Speed Limit."

This launch positions Traffic Logix as the only company offering a complete toolbox of traffic calming solutions.

"Our goal is to provide municipalities with all of the traffic calming solutions they need to slow traffic on their streets," said Craig Timothy, Director of Business Development at Traffic Logix.

The radar speed sign has been tested by the city and county of Salt Lake City, Utah. Both have commented on the excellent performance and user-friendliness of the Traffic Logix signs, as well as the company's excellent customer service. Scott Vaterlaus, the traffic engineer in Salt Lake City, noted that he was particularly pleased by the convenience of the wireless Bluetooth downloads and the internal power supply.