Train Chartering has provided two private rail cars between Los Angeles and San Diego for the press launch of a movie, Walden Media's City of Ember. 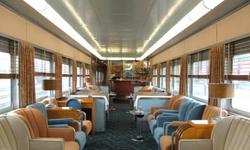 Private rail car for the City Of Ember movie launch

Private rail cars were once only available to moguls, stars, presidents and royalty - and denied to everyone else; in the 21st century, dreams become reality as more of us enjoy the sumptuousness of luxury trains, simply the best way to travel on earth.

Train Chartering sourced two rail cars that fitted the needs of the client, Fox Walden, for a memorable press launch. One car was used for hospitality and the other to display original props and to show shots from the film on a flat screen monitor.

The private rail cars were attached to the rear of a scheduled Amtrak train at Los Angeles Union Station, where a traditional jazz band played to the journalist passengers as they boarded en route for San Diego.

On board, press guests were served light snacks and drinks, viewed excerpts from the movie and had one-on-one time with the director Gil Kenan, producer Gary Goetzman ("Mamma Mia!") and screenwriter Caroline Thompson.

On arrival at San Diego, journalists went on to Comic-Con, the world's largest comic book and popular arts convention.

Train Chartering's Simon Pielow enjoys the contrast between the use of private rail cars for special events, such as launches and locations, and their original rôle of exclusive travel for the few. "Private rail cars were once only available to moguls, stars, presidents and royalty - and denied to everyone else; in the 21st century, dreams become reality as more of us enjoy the sumptuousness of luxury trains, simply the best way to travel on earth."

With the use of rail cars to launch a movie, Train Chartering's involvement with the film industry has gone beyond its growing list of location credits. These credits include: 'Manchild', 'The Passer By' and 'Derailed' for the BBC; 'Ultimate Force', 'Ditch the Bitch' and 'U Be Dead' for ITV; 'If Only' and 'Green Street Hooligans' for independent film productions; "Nenjil Jil Jil", "Dil Diya Hai" "Namastey London" and "Bhagum Bhag" for Bollywood production companies.

The productions mentioned here required a mix of rail locations: trains running on the main line railway, filming time at modern stations, a rail depot and private railway locations. Train Chartering has also road-hauled a carriage to a non-railway site.

1.    Press briefing notes from 01923-783 347 or email info @ trainchartering.com.
2.    Photos available on request and on Flickr.com
3.    The City of Ember http://www.waldenfans.com/movies/cityofember
4.    Train Chartering is behind Private Rail Cars http://www.privaterailcars.net and the Luxury Train Club http://www.luxurytrainclub.com.
5.    Realistic filming using trains poses considerable issues for film-makers. Train Chartering's rail knowledge means that it is well-placed to advise on what is possible - or impossible - on mainline and private railways.