Trajectory, Inc. today announced at the Bologna Children’s Book Fair, Sally Discovers New York by New York Times bestselling author and artist Stephen Huneck. This new original story has been designed and packaged to be read and played on all major eBook readers. 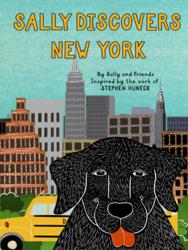 Gwen Huneck remarks, “It is wonderful for me to see Sally’s adventures continue with “Sally Discovers New York.” It is especially rewarding since Stephen and I so loved our many visits to New York City over the years."

Trajectory, Inc. today announced at the Bologna Children’s Book Fair, Sally Discovers New York by New York Times bestselling author and artist Stephen Huneck. This new original story has been designed and packaged to be read and played on all major eBook readers. Sally Discovers New York, a ‘first to digital’ work, is the second title in the “Sally Discovers Series” and the eleventh title in the award-winning Sally Series and is available today for download as a Read-to-Me eBook at Apple iTunes.

Discovering New York City is so much fun with Sally, the fun-loving Labrador retriever and her classmates from Dog Mountain School. Come along with Sally as she rides the bus, discovers the Statue of Liberty, dreams of digging for buried treasure, curls up in a cozy bed at Orvis and visits some of the world’s finest parks and museums. Sally discovers more fun and adventure in New York City than ever before. Told from a dog's point of view and illustrated with Huneck's woodcut prints, this charming and delightful story will leave you smiling.

For this project, Trajectory and The Dog Mountain Gallery applied a unique approach. Launching a Kickstarter campaign, the authors asked for suggestions of places Sally should visit while in the Big Apple. As Vermonters, they welcomed the advice from folks more familiar with New York City. By crowd-funding the project, some new, fun and off beat places perfect for a dog like Sally were discovered. By taking suggestions from Kickstarter supporters, Huneck keeps the story fluid so it is a true collaboration by "Sally and Friends."

Patrick Leahy, a Vermonter, the state’s senior U.S. senator and a longtime friend of Stephen Huneck, said, “Stephen distilled the powerful bonds we have with our pets to reveal the pure wonder and beauty of these relationships. We all try to guess about the inner lives of the animals around us. Stephen seems to have figured it out.”

Published for the first time digitally, Sally Discovers New York incorporates Huneck’s inimitable style; humor and his infectious love of dogs that lives on within the main character, the irresistibly loveable Labrador retriever Sally. Amanda McDermott from Dog Mountain narrates the story. Amanda worked side by side with Huneck and continues to work together with Gwen Huneck at Dog Mountain. This Digital 1st Edition is the second title in the new Sally Discovers Series.

Features and applications of the eBook include:

Gwen Huneck remarks, “It is wonderful for me to see Sally’s adventures continue with “Sally Discovers New York.” It is especially rewarding since Stephen and I so loved our many visits to New York City over the years. I am glad Sally and her classmates get to discover some of our favorite places too.”

Stephen Huneck was an internationally acclaimed painter, sculptor and printer as well as the creator of the Dog Chapel in St. Johnsbury, VT, where he lived. In 1994 Huneck suffered from Adult Respiratory Distress Syndrome after falling down a flight of stairs, leaving him in a coma for two months. The accident eventually led Huneck to make his segue into children's books, using his black Lab named Sally as inspiration for his first title: "My Dog's Brain". Huneck went on to write six more children's books based around Sally, including the New York Times Best-seller Sally Goes to the Beach.

About Stephen Huneck
Stephen created the Dog Chapel, his largest and most ambitious piece of artwork, Stephen Huneck Gallery and workshop on Dog Mountain near his home in St. Johnsbury, Vermont. Dog Mountain continues to be an annual place of refuge for dogs, dog lovers, and art fans alike. The chapel and gallery are open daily as are the miles of trails. His hand-carved furniture, sculpture, and woodcut prints are included in the White House Collection of the Smithsonian Institution, the collections of the American Kennel Club Library and the Museum of Folk Art, and many other prestigious museum and private collections.

"I believe art should be an integral part of life. I try to give my work an almost magical energy that makes the viewer feel good."