Marlene Cintron, President of the BOEDC, Helps Promote Owner Occupied Communities in The Bronx by Participating in Grand Concourse/Mosholu Art-Deco Co-op Trolley Tour and Sees a Bright Future For the Borough 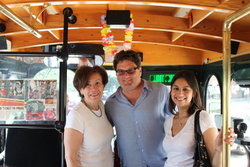 “As new investors enter the market, these diverse and increasingly owner-occupied neighborhoods will continue to expand and provide a flourishing, vibrant community for all who call it home.”

Most of the buildings featured on the tour are managed by Maxx Management, one of the city’s largest leasing and non-eviction co-op conversion sponsors in NYC. The tour was created in response to the large quantity of potential buyers wanting apartment showings in affordable well managed free market co-ops in the Bronx. The trolley used in the real estate tour is part of a cultural program facilitated by the BOEDC entitled the “Bronx Culture Trolley,” which offers free cultural tours of the Bronx on the first Wednesdays of most months as well as select Saturdays.

Gregory Tsougranis, host and organizer of the event, discussed the positive influence of Ms.Cintron’s participation. “Many of the people on the tour recognized Ms. Cintron from various media sources and were happy that one of their public servants made time to introduce herself and make herself accessible. It’s obvious that Bronx Borough President Rubin Diaz Jr. made the right choice with his appointment of Bronx native Ms. Cintron as his economic czar. She was pounding the pavement and showed great interest in getting to know the attendees. It’s an honor that she attended our tour.”

While aboard the trolley Ms. Cintron addressed the crowd of apartment hunters, heralding their efforts. “I would like to thank all of you considering buying here in the Bronx and stress that you are not only investing in your future, but also in the future of the Bronx. The Bronx has a lot to offer that you can’t get anywhere else.” Ms. Cintron then went on to ask who was from the Bronx and a large percentage of the attendees responded. Ms. Cintron pointed out that this indicated a large return of natives to the borough, as well as an impressive number of Bronxites who may be renting in the area and now want to own. She then concluded, “As investors both from other boroughs and from the Bronx enter the market, these diverse and increasingly owner-occupied neighborhoods will continue to expand and provide a flourishing, vibrant community for all who call it home.”

Marlene Cintron, President of the Bronx Overall Economic Development Corporation, asks how many tour attendees are from the Bronx while aboard the trolley.

A potential Bronx real estate investor contemplates the view from one of the renovated sponsor units on the tour.