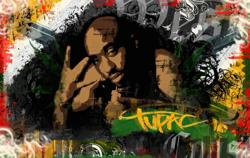 Having paved the way with ingenuity, innovation and an uncanny lyrical presence, it is only befitting to kick off the Hip Hop Wall of Fame series by paying homage to the life of Tupac Shakur.

Dubbed a hip hop icon by many, Tupac’s legacy lives on as Kings Cross Media announces the launch of the” Hip Hop Wall of Fame,” which is a cutting-edge web series that chronicles the lives of hip hop greats. Kings Cross Media, a London based multi media company is dedicating the first episode to the legendary hip hop artist.

Selling over 75 million albums world wide, Rolling Stone named Tupac Shakur as one of the greatest artist of all time. Born to a black panther mother, Tupac walked the line between thug life and revolution. From the holographic image in Coachella to being studied on college campuses, Tupac Shakur has stunned the world, even after his untimely passing at the young age of twenty five.

Tupac shared the struggles of inner city life so effortlessly with songs such as “Brenda’s Got A Baby,” which was his debut solo single that exposed teen pregnancy to inspiring the hood with “Keep Ya Head Up,” to getting gritty and grimy with street anthems such as “Hit ‘Em Up.”  He was a scribe of his time who shared the ills of society and was ultimately the metaphorical rose that grew from concrete.

According to King Cross Media senior musical journalist, Tachelle Wilkes, she ignites, “Having paved the way with ingenuity, innovation and an uncanny lyrical presence, it is only befitting to kick off the Hip Hop Wall of Fame series by paying homage to the life of Tupac Shakur."
With The Hip Hop Wall of Fame 100 episode series, it will highlight hip hop heavy weights of our time by sharing their timelines. In this episode Kings Cross Media gives viewers a glimpse into Tupac's life.  From the Bronx where hip hop was created to the heart of London, hip hop music continues to cross boundaries.

View the first episode at http://www.kingscrossmedia.com/tupac-shakur/
For more information on the “Hip Hop Wall of Fame” web video series and web video creation, contact Jono on 07982716770.