HomeThangs.com Introduces a Tip Sheet on Choosing a TV Stand for the New Flat Screen TV

HomeThangs.com introduced a few tips on the things to keep in mind while looking for a new entertainment center to make sure the new TV fits in and looks its best. 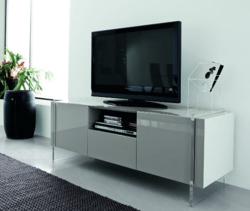 In order for the new TV to look good and not ruin the décor, it is important to plan ahead and update the whole entertainment center as well.

While being excited about getting a new big flat screen TV, many people overlook one important thing - just exactly how it’s going to fit into their living room. Even a modest upgrade in size or type of TV will probably make the current TV stand obsolete. So in order for the new television to look good and not ruin the décor, it is important to plan ahead and update the whole entertainment center as well. HomeThangs.com introduced a few tips on the things to keep in mind while looking for a new entertainment center to make sure the new TV fits in and looks its best.

1.    Why to Upgrade
Almost all new TVs these days are flat, whether it is LCD, LED, or plasma, but that means that traditional wall-sized entertainment centers that were so desirable for the much-larger CRT TVs are simply too big, and often the wrong dimensions. Even if the opening in an old entertainment center can accommodate the new TV, the deep stand will make it look very set back and can even partially obscure the picture. A simpler TV stand, like the Fly Stand from Rossetto for example, will better showcase the TV and leave the living room feeling more open.

2.    How to Mount It
Another reason to make the swap is the simple fact that flat screen TVs can be installed in a whole lot more different configurations than a CRT tv could. The big, bulky CRTs are put down once and then they are dusted around until they died. But new flat screen TVs can either be set down the same way or wall mounted. It is important to decide which way the TV will be installed before picking a new stand. If leaving the TV’s base on, it would need a stand that’s high enough to keep the TV at a comfortable viewing level. If going with a wall mount option, the stand is less important than the wall mount. For the best of both worlds, a stand with an integrated mount, like the Nightfly Ebony Stand by Rossetto for example, will save one having to secure a mount directly to the wall, which can leave unsightly holes.

3.    Why Size Matters
Even if just upgrading from one flat screen to another, larger one, one might still need to get a new TV stand. In this case, the size of the TV stand should be proportional to the size of the new TV – specifically, the stand should be at least a few inches wider. This is somewhat less true with a wall mounted option, where one can get away with having a very small stand. Something like the Phantom Stand from Bellini can help balance the space without crowding it, leaving ample room for all the electronics.

4.    Add-Ons
One thing that too many people overlook is that the new TV stand isn’t just for the new TV – it’s for all the stuff that goes with it, too, from the sound system, DVD player, and gaming systems to any and all other media one wants to store in that space. So in addition to considering the dimensions of the TV, it is important to make sure the drawers and shelves on the TV stand can accommodate all that stuff. Xboxes don’t like to be in closed spaces, and receivers linked to extensive sound systems come with a veritable plethora of cords that need to be hidden. For example, the unique, ultra-modern Inside Out Stand from PolArt is a surprisingly good choice, with a nice combination of shelves, surfaces, and drawers to keep a variety of electronics happy.

5.    A More Modern Entertainment Center
Old, big, boxy entertainment centers are falling out of vogue with the shift to flat screen TVs, but that doesn’t mean getting stuck with just a simple TV stand. In fact, many companies offer extensive, elegant modern entertainment centers that are anything but the full-wall style varieties. For example, the Nightfly Wall Unit from Rossetto has a beautiful white mount backing for the TV and a low-to-the-ground, built-in looking media storage for a more seamless, less bulky finish.

6.    Planning Ahead
Those who just bought a new big screen TV and are in the market for an entertainment center to go with it, probably want to keep that setup for more than a couple of years. So, in addition to considering all the electronics one already has, one should also give some serious thought about what additions might be made in the next few years. For example, upgrading from a sound bar to a surround sound system with a receiver, getting a new gaming system a blu-ray player, Apple TV box, or something else will some room as well. It is important to make sure to get a tv stand that can accommodate the future needs. If not sure, a modular shelf-style media center made of independent pieces, like the Zenith Shelf from Nuevo for example, is a great way to build an entertainment center that will be easy to add on to later.