As the real-estate market beings to recover, property owners, developers, and architects thinking about pursuing LEED certification should consider using Urban Green Energy vertical axis wind turbines to provide on-site renewable energy. Generating on-site renewable energy complies with the requirements of several LEED rating systems and can earn up to 10 points depending on the system. 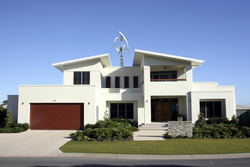 In several instances, the minimum percentage of renewable power needed to qualify for credits is lower for on-site renewable energy sources, such as wind turbines, than for renewable power supplied by a utility. For example, under the "LEED 2009 for Existing Buildings: Operations & Management" rating system, an off-site renewable energy source must supply 8 times more power than an on-site source to earn the same number of points. Under the "LEED 2009 for New Construction" rating system, a minimum of 35% of a building's energy must be supplied by off-site renewable sources in order to qualify for any points under the "Green Power" credit. Only 3% of the building's power must come from an on-site source to qualify for the same number of points.

Said Scott Van Pelt, LEED GA, "on-site renewable energy is a very efficient means to earning LEED credits. UGE's vertical axis wind turbines are definitely a good product to consider due to their highly adaptable nature. I am more frequently hearing about LEED projects that incorporate wind or solar into the design."

Urban Green Energy wind turbines provide reliable energy even in areas of turbulent airflow, including densely populated urban centers. Their vertical axis design takes advantage of air movement regardless of which direction the wind is blowing. Currently the company produces three models which are rated at 600W, 1kW, and 4kW, yet all are compact enough to be positioned on the roof of a commercial or residential building.

Takayuki Koizumi, a sales manager at UGE, recently instructed a class of architects and engineers on the merits of integrating wind turbines within a LEED project. When asked to comment on consumer interest, Mr. Koizumi noted increased interest in the subject. "Definitely more of our customers are interested in LEED credits. As the leading manufacturer of vertical axis wind turbines, our products are able to work on rooftops, towers, and street lamps, as well as many other applications. We are always excited to be a part of the project's vision."

Urban Green Energy is a market leader in the production of vertical axis small wind turbines with offices in New York City, London, and Beijing. For more information visit http://www.urbangreenenergy.com.